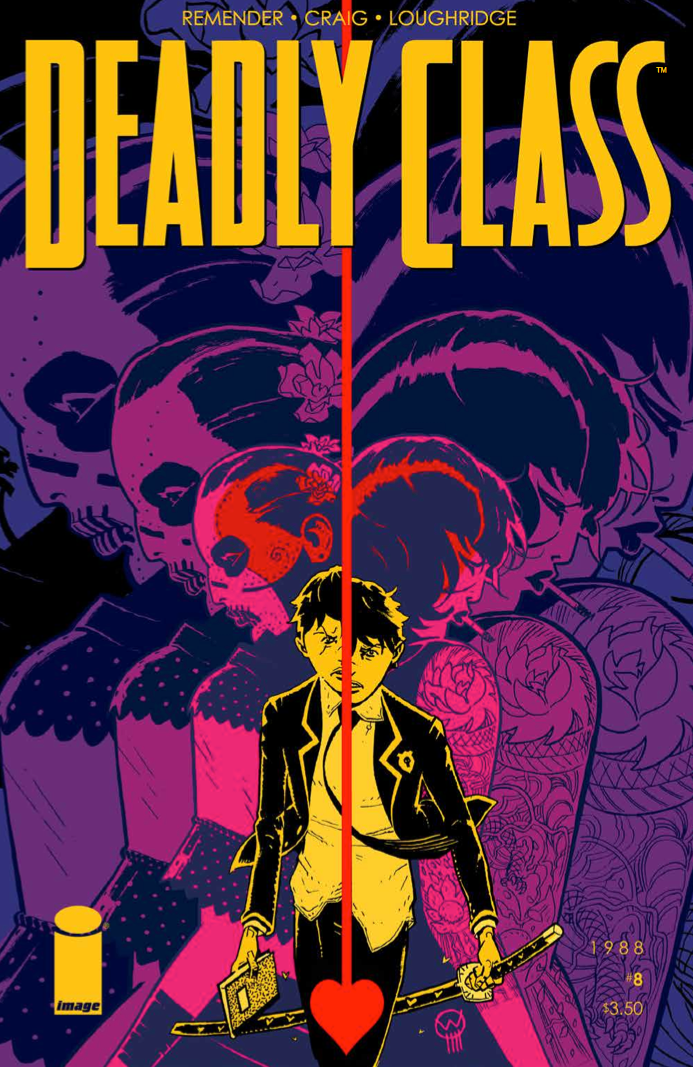 Mental illness and the scars we carry inside have been constant themes throughout Rick Remender’s comics ever since his work on Fear Agent. The causes and ramifications of our internal scars, specifically depression are found in Uncanny X-Force, Low, Black Science, and most projects Remender touches. However, nowhere in his bibliography have these ideas been better explored than in Deadly Class. Wes Craig (pencils) and Lee Loughridge (colors) have translated Remender’s script to the comics page in such a way that these ideas are crafted in beautiful, undeniable visual metaphors. They not only tell the story impeccably, but use every tool at their disposal to convey these themes and ideas in impeccable style. That style has never been more clear than in Deadly Class #8.

The newest issue of the series is a flashback framed by two sequences in the present timeline of the story. It is the second half of Marcus’ origin and a mystery that has been teased for the previous seven issues. This is a narrative that had to be told. It is both an integral part of who Marcus is and why he is in this story. Yet backstories and exposition like this rarely make for great comics, or stories in general. The obligatory flashback to key motivating events is often more likely to slow the narrative or provide important details in a convenient and hackneyed manner than anything else. But this… this is an example of how a flashback can be used to not only create an incredible comic, but to elevate the rest of a series.

Remender, Craig, and Loughridge take advantage of this shift in time to increase the depth and complexity of Deadly Class. They recognize the importance of Marcus’ past and how it can enhance both the character and themes of the narrative. This issue is told entirely from Marcus’ perspective. His thoughts literally color the scenes and transform the third person perspective of most panels into that of the first person. Even though the panels show Marcus, they reflect his memories of himself and his actions. He is telling the story and his thoughts and feelings are what shape how it is told. In this issue, the creative team has crafted a comic that delves into the experience and origins of depression. They have confronted what David Foster Wallace referred to as “the bad thing” and created a portal for others to better understand it. The story of Deadly Class is impossible, but the experience real

That immersive, personal experience doesn’t start with the flashbacks though. It begins on page one and runs throughout the entire issue. Lee Loughridge is the artist who makes the effect possible by creating a series of monochromatic color schemes that change and intermingle throughout the issue. In the opening pages though, the grey that overwhelms every panel reads like a scene taking place in the fog and gloom of San Francisco. It blurs the line between a depiction of normal Bay area conditions and a color scheme that reflects Marcus’ inner thoughts and feelings or, rather, their notable suppression. 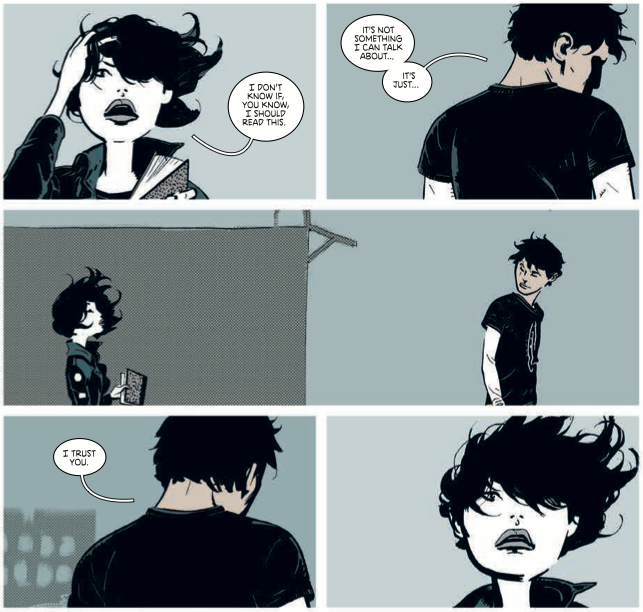 The importance of Loughridge’s color choices don’t become clear until midway through the issue which makes a second (and third) reading of the comic so important. Only after the timeframe shifts does it become clear that the grey of the present is a decision that reveals Marcus’ emotional state. Everything about the opening pages focus on Marcus’ sense of isolation and the cold, pale colors of each panel emphasize this.

Craig’s compositions make the solitude clear on an initial reading though. He divides pages in order to keep Marcus and Saya visually separated. Even when they occupy the same panel, Craig creates artificial barriers in his composition. A building in the background or toss of a journal emphasizes that even when Marcus is with someone else he feels alone.

Loughridge’s use of monochromatic color schemes in this issue does not become clear until Saya reads Marcus’ journal. The comic narrative moves back in time and the colors shift from cool greys to a variety of unrealistic hues. This flashback is colored by three distinct schemes that are separated into three distinct events and settings before converging in a climactic fourth section. 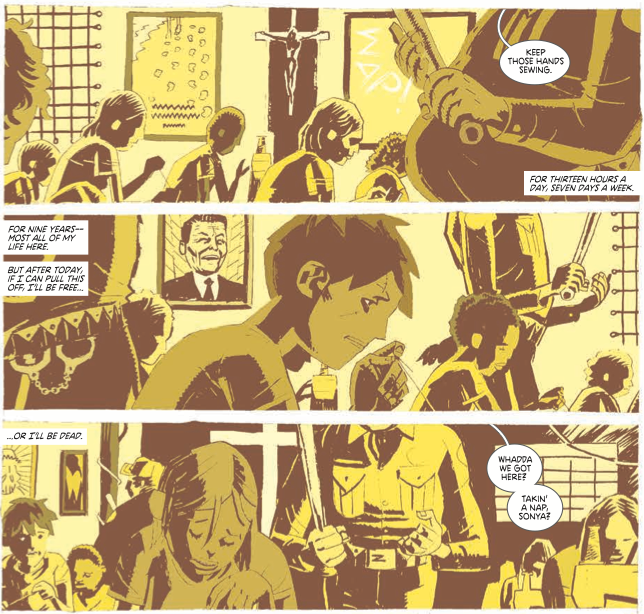 It opens on a child sweatshop that is steeped in dull yellows. It’s a terrible situation and one that the shades of yellow reflect. They create a sense of caution for readers, warning them that there is nothing good to be found here. Marcus’ life is set in a place where only decay is possible. Whether it is the children being worn out by long hours of physical labor or the destruction of their overseers’ souls, nothing is generated in this setting. The yellows run like urine down the page, appearing just as disgusting as what is happening. 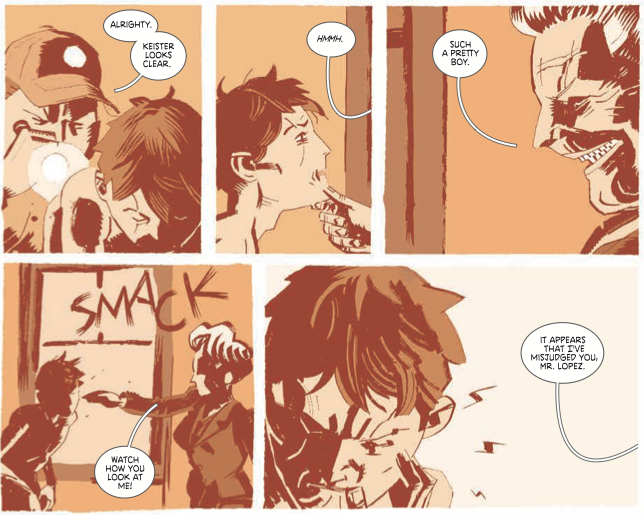 Loughridge’s colors shift to reds when Marcus is confronted by the monstrous human beings who run this sweatshop. His caution and weariness is transformed into wrath. The woman behind the operation shows no trace of humanity in her treatment of children. Although Marcus stands and accepts his abuse when stripped and demeaned, his anger is made palpable on the page. His face twisted in pain and anger, focused through the lens of a deep, dark red, holds endless reserves of contempt. 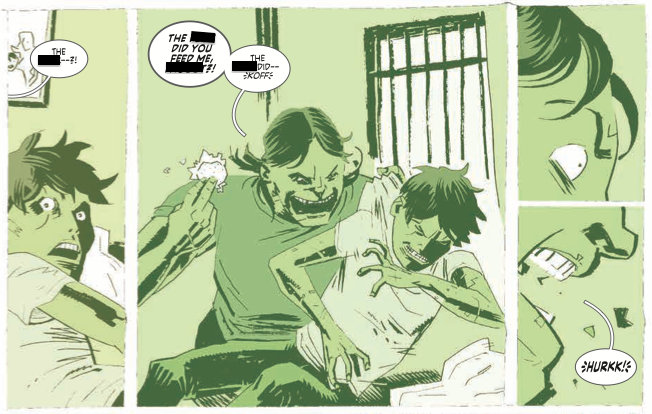 Finally, Marcus must suffer abuse from his roommate. Although they come from similar origins, this young man perpetuates the same sadistic behavior he has suffered on the world around him. His actions and words are awash in a sickly yellow-green. The rage and decay of this place has created a monster far worse than itself. There is nothing redeemable about this character, every panel he occupies only serves to reveal another sickening facet to his personality.

This combination of decay, hatred, and sickness combine to create a setting from whence nothing good can come. What comes next is every bit as horrific as the factors that make it possible. The yellows, reds, and greens combine to emphasize the horror of the climax. It is an answer that satisfies the central mystery of Deadly Class and provides insight into Marcus’ state of mind.

The flashback is not an impartial accounting of what occurred. It is the story as told by Marcus in his journal. It is a series of memories colored by time and pain. Loughridge’s choice of colors are not accidental. The selected hues are all tied with negative, destructive concepts that comment on the moments and settings they occupy. These are Marcus’ emotional scars, the ones that cannot be seen, but are always present.

Marcus’ scarring has been a visual motif throughout the series. His body is covered in scars, most of which can be covered with clothing. Yet there is the cut across his right eye, one that cannot be hidden. It represents only a small portion of his collected suffering, but it is impossible to hide. That scar reveals that you cannot entirely cover up pain. There is always some reminder or clue to that which haunts us. The same applies to Marcus’ emotional scars. Here they are shown in all of their horrendous depth, but they have always peaked through. In the seven issues that led to this revelation, Marcus has clearly been affected by something, but it was mostly hidden.

That conception of scars both physical and mental is a potent perspective on mental illness and depression. Marcus is capable of disconnecting from the world. He is able to hide most of his pain, but the pain is still there though and the signs are never entirely hidden. Although Marcus begins the comic isolated by his own choice, the truth of his suffering is there to be found. It is noticeable to those who look at him and choose to acknowledge what they see.

The conclusion of Deadly Class #8 is not overtly positive, but is contains a subtle hint of hope. It builds on the idea that Marcus’ pain is not invisible by acknowledging it. Both readers and Saya are aware and provide a bridge for Marcus. The cold, greys of his world are still present, but there is a small splash of color. There is the possibility that things may get better.

Deadly Class #8 is a tour de force, a terribly beautiful meditation upon pain and depression. Through this outlandish narrative, Remender, Craig, and Loughridge have constructed a story that is emotionally true. It acknowledges what it means to be in pain, what it is like to hide its origins, and the difficulty of seeking and obtaining help. It is does not aim to provide easy answers or solace, but it is a true story. It is authentic in the way that matters most, in reflecting what it is like to be human. In telling that truth, it provides some small opportunity for relief and understanding by showing its scars.

REVIEW: Deadly Class #8 is a Terribly Beautiful Meditation on Depression