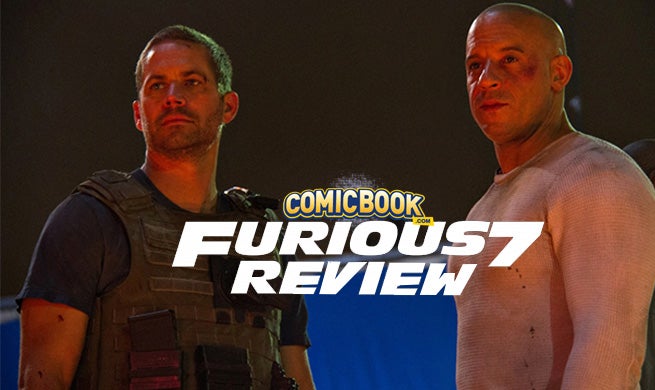 Going into Furious 7, I had high expectations for ridiculousness. The film certainly did not disappoint. In fact, it exceeded those expectations. This is the most ridiculous, unbelievable Fast & Furious film of the franchise. Therefore, you should check your logic at the door and just go have fun.

The film comes on the heels of two huge events: the largest success in franchise's 15 years of history, Fast 6, and the untimely tragic death of series star, Paul Walker. The latter will be on your mind throughout the movie as you watch Walker's final film- a project that became a passion project for his both on-screen and off-screen family.

In Fast 6, Dominic Torretto (Vin Diesel) and his team took down Owen Shaw (Luke Evans). This time, Deckard Shaw (Jason Statham), who is no stranger to settling his little brothers quarrels, comes out of hiding to seek revenge on those who crippled Owen. For the first time, it feels like Dom, Brian (Paul Walker), Letty (Michelle Rodriguez), and the gang are on the defensive at times.

The post-credits sequence from Fast 6 set up the story for Furious 7. When Han (Sung Kang) went to Tokyo after Fast 6, all of Tokyo Drift took place, and then big brother Shaw came along to strike his first ounce of revenge. Right from the beginning, Furious 7 displays the unreal havoc that Deckard Shaw is capable of wreaking. On a lighter note, Furious 7 does pack a couple of fun cameos from the Tokyo Drift cast.

It was unfortunate that Hobbs (Dwayne Johnson) spent most of the film in the hospital. Johnson really commands the screen with each second he gets. It may have been short lived, but definitely one of Johnson's better, more entertaining performances, but while Dom and the crew spanned the globe both hunting and hiding from Deckard Shaw, Hobbs was out of commission. His trip to decommission was fantastic, though. The fight scene between Johnson and Statham was,  hands down, the best sequence of the film despite some crazy camera rolls. Unfortunately, many of us know how that fight ends up because of what was given away in the trailers.

It's Vin Diesel who carries much of the load. He delivers every line of dialogue, even the cheesiest, most expositional lines are made to sound life changing. You can just tell he believes in what his doing and despite all the nonsense that may be going on, he will make you believe, too. It's really hard not to like Diesel after seeing how he carries himself during all the promotion of the film and the passion he has on screen. Claiming the film deserves a Best Picture award is a bit much, but that fits how outrageous and fun the film is, anyway.

The two delightfully surprising roles of the film came from Tyrese Gibson and Kurt Russell. Tyrese's character, Roman, was funny at all the right times. None of it was forced, misplaced, or poorly written. Tej (Chris "Ludacris" Bridges) and Roman have a handful of excellent humorous brotherly moments in the midst of tense scenes that keep the audience both entertained and restrained from diving too deep into the less-than-logical plot.

In his debut to the franchise, Kurt Russell plays a witty underground government agent who needs to retrieve the "God's Eye" device that can locate anyone at almost any time. His name: Mr. Nobody. Naturally, Mr. Nobody and Dom don't see eye to eye, especially because Mr. Nobody prefers a Belgian ale while Dom prefers Corona, but they have to set aside their differences for a common interest: Deckard Shaw.

What would a Furious 7 review be if it didn't mention how ridiculous it was. For this one, you literally have to leave all logic at the door. If the scene where Paul Walker runs along the side of a falling bus to grab onto Michelle Rodriguez's spoiler during a perfectly timed drift isn't enough, there's the building to building to building flying car scene and another that will surely be a favorite at the end, involving a  Pontiac GTO, a helicopter, and an empty Los Angeles parking garage. As a matter of fact, even considering that the characters are seemingly invincible, I think that the most unrealistic part of the film may have been a completely empty public parking garage in Los Angeles. All in all though, the flying cars, races, and unbelievable invincibility makes for a fun movie if you'll just accept it.

Cars parachuting out of a plane just sounds nothing other than ridiculous when you say it out loud, but watching it on screen I was actually leaning forward on the edge of my seat, loving the chase down the curvy mountain road director James Wan put together. As far as directing goes, this was probably where Wan succeeded the most. The scene made for a nail biting experience and found a way to pack a few laughs in, as well.

Throughout the film, of course, Paul Walker will be on your mind. The first few times Brian O'Connor comes on screen, you'll hear the whispers of people sitting near claiming whether or not it's actually him. In many parts throughout the film, I had my doubts as to whether or not he had actually filmed the scene I was watching. Several times the camera would be behind him, focused on his hands rather than his face, or he would be standing away from the group. When you do see Walker's face, they did a fantastic job of editing it to look like him in any scenes that aren't actually him. In any case, do yourself a favor and try not to focus on these parts and let the movie play.

As for Walker's departure from the franchise, it could not have been done any better. It's a beautiful send off and Wan did a great job with what footage he had. The bits of the story that were altered to adapt to the unfortunate passing won't be caught by everyone and honestly, I can't say with 100% certainty what those parts were either. All I can say is that it is a beautiful farewell that is capable of making any fan of the franchise emotional.

In the end, Furious 7 is just what we all expected. It has a feel of a classic action movie with modern day effects and an enormous budget. It's big, it's loud, and it's fun. It pays Paul Walker the respect he deserves and allows room for the franchise to either end here or continue on elsewhere.

Bottom Line: If you leave logic at the door, buy the biggest popcorn bucket the theater has to offer, and want to have fun- Furious 7 is the film that will take you on the ride you're looking for. 7.9/10

REVIEW: Furious 7 Demands You Leave Logic At The Door