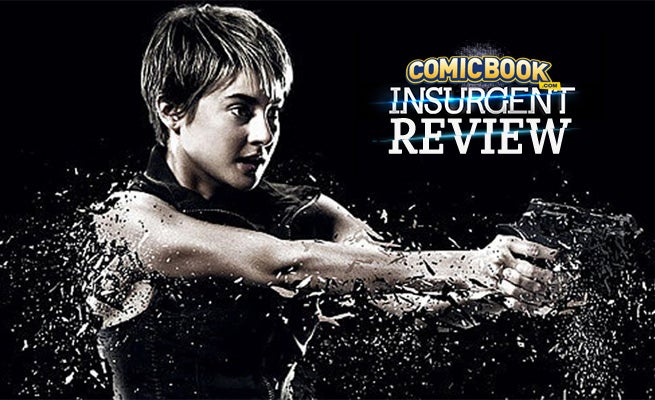 Insurgent, based on the YA novel, picks up in the aftermath of Divergent. While Divergent had the burden of setting the very complex scene that the series would take place, Insurgent has the advantage of the characters and their goals already being established. The world has all but ended and the surviving humans live behind protective walls in a dystopian Chicago, working in pre-destined factions and upholding the status quo. So, it should just be rolling on all cylinders and be an exciting middle leg of the race to Allegiant, right? Wrong- the action and pacing is there but the story-telling is not.

Jeanine (Kate Winslet), the Erudite leader, needs a divergent to open a box that she, for some reason, swears will eliminate all divergents for good. She obviously has no real knowledge about what is actually in the box that Beatrice's (Shailene Woodley) parents were hiding and apparently died for but is willing to kill for just the possibility of opening it.

Of course, Beatrice is the only 100% divergent who could possibly pass the tests for all five factions and successfully open said box. The story goes through loops leaving holes all over the place on it's way to getting that box open. Four (Theo James), Tris' "scary boyfriend," encounters a couple different groups of people he ends up fighting, only to eventually say something afterwards turning them from enemies to friends and completely dubbing the fight unnecessary to begin with.

Maybe the character choices make more sense in the book when they have more detail and aren't crunched for screen time. Insurgent is just loaded with eye-rolling and head-scratching moments. So many easy outs for the writers that it's just unacceptable. Not only are they easy outs, but they're easy outs with little or no explanation.

The plot holes continued when Eric (Jai Courtney) and his group of ruthless military mercenaries tried to take on Tris and the other divergents they found. Apparently, some grew a heart when they found what they were looking for. Just when Eric has Tris in a corner and mission is complete, a few of Tris' friends show up and Eric's buddies are literally no where to be found with no explanation to where they went but in the very next scene are alive and well in a completely different place.

The movie falls incredibly flat when Jai Courtney or the (and I never thought I'd say this) over-qualified-for-this-film Miles Teller aren't on screen. Teller dominated his screen time and if anything can be taken away from Insurgent, it's that there is hope for Josh Trank's Fantastic Four. Both actors made you hate their characters, which is a compliment to their ability because we are supposed to. Unlike James and Woodley who give us no reason to like their characters who happen to be the protagonists we should be rooting for. To me, it just seems like so many of the cast members regret signing on to this franchise through their uninterested expressions while acting and their even less interested attitudes promoting it, which I noticed on The Today Show.

I'm not saying this in a sarcastic tone, but the best part of the film was the end. The last ten minutes gave hope for the franchise although we've already seen something very similar from Maze Runner. Insurgent is just a mess. It's story conflicts with itself and tries to make you think it's okay with a few visually fun scenes during the virtual reality tests we first saw in Divergent. Almost everything before the last couple of scenes makes me want to not watch the third installment that will inevitably come to wrap up the franchise.

Bottom Line: Insurgent is better than it's predecessor, Divergent, but that's hardly a compliment. It struggles to tell a messy story that even it's clunky, expositional dialogue couldn't help make sense. 4.9/10

REVIEW: Insurgent Is Messy, Clunky, And Anything But Revolutionary

10 Comics to Read After Watching The Old Guard

Star Wars: Disney+ Has Fans Heated Over Their Favorite Movie