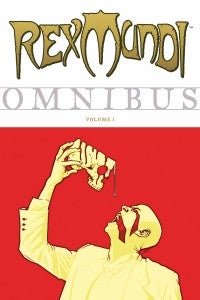 Dark Horse Comics has announced that it will collect an omnibus edition of Rex Mundi, Arvid Nelson's fan-favorite, award-winning supernatural murder mystery comic. Published in two volumes, Rex Mundi will also make a reappearance in Dark Horse Presents #15, the publisher's popular anthology title. "I'm thrilled Dark Horse is making Rex Mundi available in an omnibus format—it's the way it was always meant to be read! The story in Dark Horse Presents is the perfect introduction for new readers, and I think old-timers will get a kick out of it, too. We open things up with the Holy Inquisition in Paris, the day before the main story line begins," said Nelson in a press release. Dark Horse Presents #15 is on comic stands August 22, 2012, and the Rex Mundi Omnibus Volume 1 is on sale September 5, 2012.