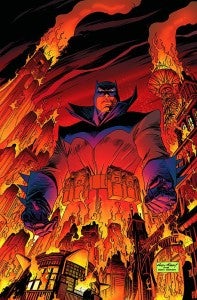 Andy Kubert, who co-created Damian Wayne along with Grant Morrison, will write and draw a four-part "possible future" miniseries set in a world where Damian Wayne takes over as Batman.

"I had a big affinity for Damian when I drew Batman issue #666 (in 2007),” Kubert told The New York Post. “I really liked that Batman and always wanted to revisit him. Damian is a bit different than the ‘Bruce Wayne’ Batman. Grant Morrison tweaked his character in a way that made it very endearing for me to draw. And to write. Basically, what I'm doing is exploring the path that Damian has taken to become Batman. I think readers will see him in a different light than before.”

This will mean that Damian Wayne stayed out of print for eight months, following his death in February, since the first issue of Damian: Son of Batman will ship on October 30. Of course, a "possible future" doesn't necessarily mean he'll be back--now or anytime particularly soon.

Morrison's epic run on the Batman titles, which began in 2005 with the introduction of Damian, ends next month with Batman Incorporated #13. He has promised not to bring Damian back at the end of his run, saying that he wants to put things back the way he found them and that the character was always "built to die."

Of course, with a "possible future," one has to immediately wonder if we'll get a variation on the famous "imaginary story" blurb from Alan Moore's Whatever Happened to the Man of Tomorrow, but the missed opportunity to tie Damian to Ibn Al Xu'ffasch (Kingdom Come's "Son of the Bat") by slightly tweaking that title suggests that maybe DC isn't particularly interested in visiting successful Elseworlds of the past here.