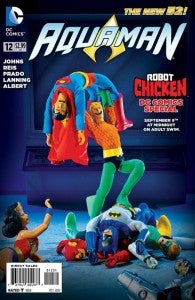 Aquaman may not be the first character that springs to mind when you say "badass," but the folks over at Robot Chicken are looking to change that perspective a little bit, as he stars in the September 9 Robot Chicken DC Comics Special as a villain who helps take down the Justice League.

And in recognition of Arthur's non-comics coming-out as a force to be reckoned with, DC Comics will be celebrating with a Robot Chicken variant cover on this month's Aquaman #12, due in stores August 29. It's rare for DC to go for a photo variant; while one or two may have sneaked through, the last time I remember them doing anything of the sort in their superhero lineup was with the Blair Butler cover for Booster Gold, but that was the standard cover, with no variant in sight.

TV Guide had the first look at the cover, along with an interview with some of the pertinent talent.

"This is the last thing I ever thought we'd put on an Aquaman cover because it's such a bizarre collision of worlds but I think it's one of the best covers we've ever done...I just love the look on Superman's face!" DC Comics chief creative officer Geoff Johns told the magazine. "Aquaman will play a pretty big role in the show," promises Johns. "In fact, the title could just as easily be How Aquaman Got His Groove Back!"

Actor and Robot Chicken co-creator Seth Green chimed in as well, saying, "This DC special is my favorite thing we've ever done. It's the first production from our new studio [Stoopid Buddy Stoodios] and everything just worked — the writing really came together and we got an incredible cast."

The special will air on Adult Swim September 9.