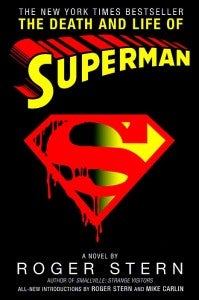 The second in a series of interviews with the creators behind DC's 1992 Death of Superman story, meant to commemorate last weekend's twentieth anniversary of the release of Superman #75, former longtime Action Comics and Superman: The Man of Tomorrow writer Roger Stern joined ComicBook.com to talk about the story, its impact and the process of adapting the still-incomplete tale to his best-selling novel, The Death and Life of Superman.

Stern, an industry veteran and fan-favorite writer, enjoyed long and critically-acclaimed runs not only on the Superman titles but also on books like Captain America and The Amazing Spider-Man. While he works less in comics these days, Stern has written Superman and Smallville prose novels in recent years, as well as a Captain America Corps miniseries for Marvel Comics.

While you wrote a lot of key stories in Superman's publishing history, the death-and-rebirth stuff is among some of the very little material DC singled out as still having happened post New 52. It doesn't seem like it can be just sales--what do you think is the enduring appeal of that story?

First and foremost, the story is about Superman. People like the very idea of Superman. And the story of Superman's death and resurrection resonates with people … in a “you don't know what you've got till it's gone” way.

Secondly, DC has wisely kept this story in print, so it's still out there. It hasn't disappeared into some back issue bin. It's still easily available for a new generation of readers to find and enjoy. Wish I could say that about more of our stories.

Plus, it's a pretty damn good story.

How do YOU feel about the story? It's very fondly remembered by some and by oths it gets a lot of the blame for the speculator boom and bust of the '90s.

I certainly look back on it fondly, even though parts of it later became a bit of a blur. I got to collaborate with a lot of very talented writers and artists, and to turn out work that is still read and enjoyed twenty years later.

And we were hardly to blame for the speculator boom. That had already been going on for at least a couple of years when we started our story. And while, given the time, I'm sure that many copies of our issues were bagged and boarded and stashed away, a lot of them were actually read. I've run into so many people who told me that our story either started them reading comics … or got them back into reading comics. 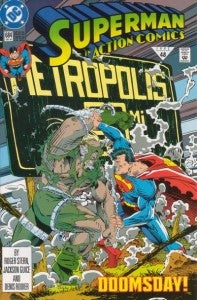 20 years on, The Death of Superman still figures prominently in your bio. Is it something that you think about regularly?

I don't know if I would say “regularly,” but I certainly think about it from time to time.

How would you describe the creative process that shaped the story? Jerry's "Let's kill the bastard" was widely reported in the documentaries on the Superman: Doomsday DVD, but that's not how either Jurgens or Ordway remembered it when I talked to them.

As I recall, Jerry Ordway had joked at one point that “We could always kill him.” But Jerry often said that when we were stuck for ideas. He'd either suggest killing Superman or having Superman fight a werewolf. (Jerry had sketched out a cover idea some years before that had Superman battling a werewolf. It was one of those ideas that we just never got about to dealing with. Too bad; it could have been a cool story.)

But getting back to your question about the creative process … what you need to remember is that there were about a dozen writers and artists working on the Superman titles in those days. And we all used to gather -- once or twice a year -- for a meeting to discuss plans and brainstorm ideas for the next year’s worth of stories. We called these meetings the "Super-Summits."

When we got together in '92 to outline the books that included Superman #75 and Adventures of Superman #500 … well, originally we were going to plan the wedding of Clark Kent and Lois Lane. We'd started setting that up in Superman #50, when Clark proposed and Lois said, “Yes.” But the wedding scenario was put on hold, because Warner Brothers had gotten the green light to produce the Lois & Clark television series for ABC. They didn’t mind us having Clark and Lois marry, just as long as they got to set the stage for the wedding first on TV.

So we had our work cut out for us. Everything that we'd been working toward had to be delayed.

Not too surprisingly, there was a lot of chaos on the first day of the Summit, with all of us brainstorming new ideas. Somewhere in there, Jerry tossed out his usual “We could always kill him” gag. And someone else … Dan? Louise? Bog? I don't remember now. Someone else chimed in with, “Yeah, if we can't marry him, let's kill him.” Or words to that effect.

At that point, Mike Carlin, showing great editorial acumen, replied, “All right, wise guys, suppose we kill him. What happens next …?”

And that was when the ideas really started flowing. How does the city react when Superman dies? How does the world react? How does Lois react? Don't forget, she was one of a handful of people on the face of the Earth who knew that Clark Kent was Superman. She was engaged to him. And now … she still can't tell anyone, because it would endanger his parents.

Within a few hours, we had so many ideas, that we couldn't not do the story.

As I recall, Dan had wanted to introduce a new physical threat for Superman, and as the ideas were flying he started sketching out the monster that would become Doomsday. How he managed to do that, while carrying on with his part of the brainstorming, I'll never know.

It was an amazing time.

How did you end up being the guy to write the novelization?

Once the story was underway, and starting to garner attention, Bantam Books approached DC about publishing a novel that would recount the entire story of Superman's death and eventual return to the living. DC liked the idea, but the only question was, who could write it?

It would take too long to bring an outside writer up to speed. After all, it was an ongoing story arc ... a trilogy of story arcs, really. We knew when and where it would end, but that ending had yet to be written and drawn. So, Mike Carlin suggested me for the job. And, not fully knowing what I was letting myself in for, I said, "Yes."

The next thing I knew, I was contracted to write a 150,000-word novel … on top of my regular day-job, which was writing Action Comics. This was in February, 1993, and Bantam wanted the novel to go on sale on August 25th. Of that year! On the same day that Superman #82, the issue that would feature the climax of Superman's return was scheduled to go on sale.

Which meant that that final manuscript needed to be finished by the end of June, early July at the latest. That's right, I had about five months to adapt a story that hadn't even been finished yet. Somehow, I did it. But that Spring still remains mostly a blur to me. (What I could recall, I wrote about in the new introduction to the Trade Paperback edition of The Death and Life of Superman … which, by the way, makes a great Christmas present.) 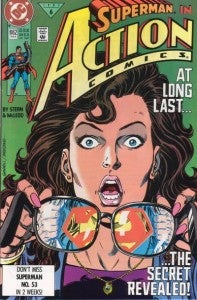 Even before the New 52, so much of Superman reverted back to a pre-Crisis status quo after you guys left. I like to think of everything from Man of Steel until 1999 as basically its own, standalone series.

1999 sounds about right. Certainly, our era was over as soon as Lois's hair changed color and Superman started freezing things with his breath.

Science says you're wrong, if you believe that Superman can freeze things by blowing on them. That's something Hollywood always gets wrong, too.

Is it hard to see your stories discounted by the publisher or is that just part of serialized storytelling for you?

The fact that the stories are serialized has nothing to do with it. It's more a question of ownership. I don't own those stories; none of us do. DC Comics owns them. So, DC or Warners -- or whoever -- gets to do whatever they want. I mean, that's one reason why Superman's origin has been rebooted at least three times in just the past decade.

If that's too hard on you, you're really in the wrong business.

Me, I'm used to it by now. Superman was around before I was born, and people will be telling stories about him long after I'm gone. I'm just pleased that they've kept this much of my work in print.

Your work on Captain America Corps was really great, and it was nice to see you return to that character. Do you think you'd still have some Superman stories to tell, post Never-Ending Battle? Possibly. As a matter of fact, I collaborated with Kurt Busiek on a plot for a four-issue Superman story arc about five years ago. That story wound up getting delayed and was never drawn.

But I never say never.