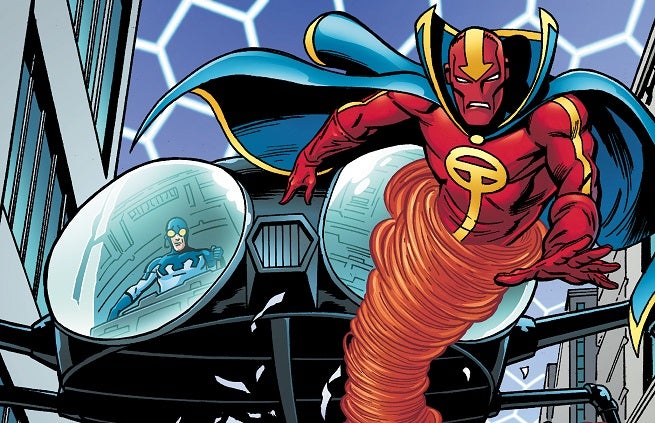 Coming up in April, writer Ron Marz and artist Mike Manley will pit the Justice League International (circa 1994) against the world of Kingdom Come, the bleak, alternate future where superheroes are partially responsible for a nuclear holocaust in the American Midwest.

While Booster Gold is AWOL, the rest of the old gang -- including Fire, Ice, Blue Beetle, Martian Manhunter and his Oreo cookies -- are present and accounted for in a tale that will pit one of the most lighthearted and zany mainstream superhero teams in recent memory against one of the grimmest, most serious futures in the DC canon.

Marz and Manley joined ComicBook.com to talk about the two-issue series, which launches on April 15. 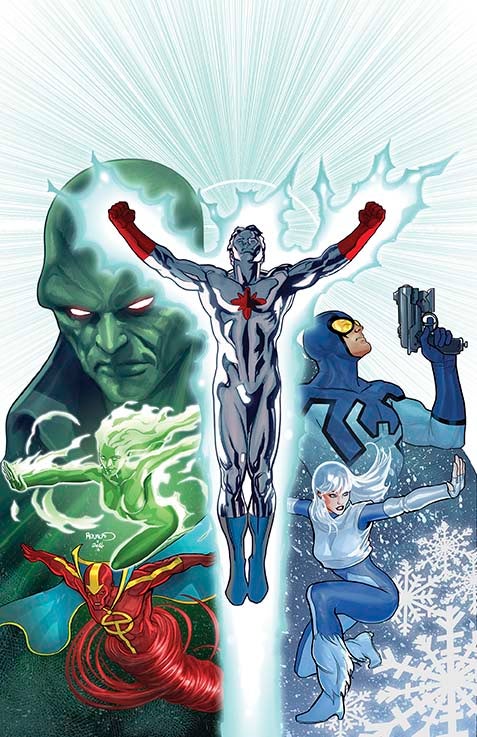 Why this group of heroes?

Ron Marz: From a practical point of view, we're plugging into a specific era in DC history, so that was the starting point for filling out the roster. We started with the pre-Zero Hour JLI roster, and then tinkered here and there. Not everybody was available, because some characters were needed elsewhere, but I'm quite pleased with the roster. I've got a real affection for Martian Manhunter, so I'm really happy we got him in there. And I've always been a Red Tornado fan, and this is my first chance to write him. It's a good mix, and I like the way they play off of one another.

What was your first reaction when they came to you about Convergence? Getting pitched the concept before all the rumors started must have been a little crazy.

Manley: It came about from meeting Marie, the editor at Baltimore Comicon. We got to chatting and she asked if I would be interested. I said sure, as I had time in my schedule since graduating with my Masters last May. I wasn't aware of any rumors about the project and just concentrated on drawing telling as exciting a story. Its been a few years since I worked for DC so it was something I looked forward too.

Are there any other characters -- from the JLI or elsewhere -- who play a big role in this story?

Any chance we'll see Big Motherlovin' Armor Booster Gold? Or is the fact that we already have a minimum of two Boosters running around being TIme Masters limiting to what you can do with him here?

Marz: Booster's dance card is pretty full in Convergence, but I think we'll find a way to sneak him in there. Everybody wants a Booster and Beetle moment. 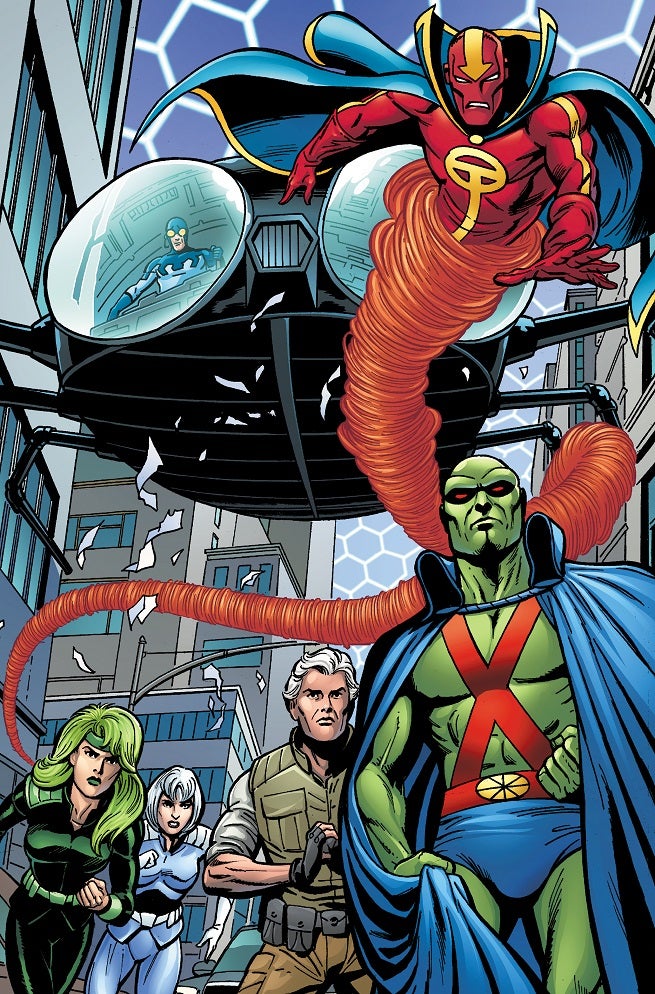 Given the selection of characters here, you didn't really get a '90s-tastic character to draw. Is that a bit of a relief, or a little disappointing since this is a period book?

Mike Manley: That type of thing always depends on the project and the story. You can have a great character and a boring story, bad story, or a second tier character and a great story. I've been doing this long enough to have experienced both. Honestly I had no desire to ever draw Azbats costume again…ha!

Do you approach this book any differently, in terms of trying to bring a sensibility to the characters that matches the publishing era, or do you think it's better to just depict those characters with today's sensibilities intact?

Manley: Hmm. Well I looked at that era's work and reference that DC sent, and I was aware of the work that Maguire did on his run with the characters. I was still working full time in comics until 96 when I left for the most part to work in animation—on the WB Supershows shows. But its not like they wanted me to draw in some 90's style, whatever that might be, some watered down "Image" style, and while my work is better today than 15-20 years ago—fans who liked my work then I think will like this book. I think having to draw in any "style' hems one in, and I don't draw like the artists on that book in that era anyway. I think strong acting and character are the real key here for this set of characters—that's what I am concentrating on from Ron's plot, that is the key I feel overall to these characters.

Obviously these characters, especially when you say "the levity of the JLI team," are associated with a certain amount of humor, which is not what you're well-known for writing. Do you think this will give a large audience a chance to see you stretch out a little?

Marz: Stretching different muscles is great for a writer. You're right, I haven't written a lot of comedy, because it hasn't been appropriate to a lot of the projects I've done. I'm certainly not in the same league with Giffen and DeMatteis, who do that stuff better than almost anybody. But we'll definitely bring some funny to these issues. 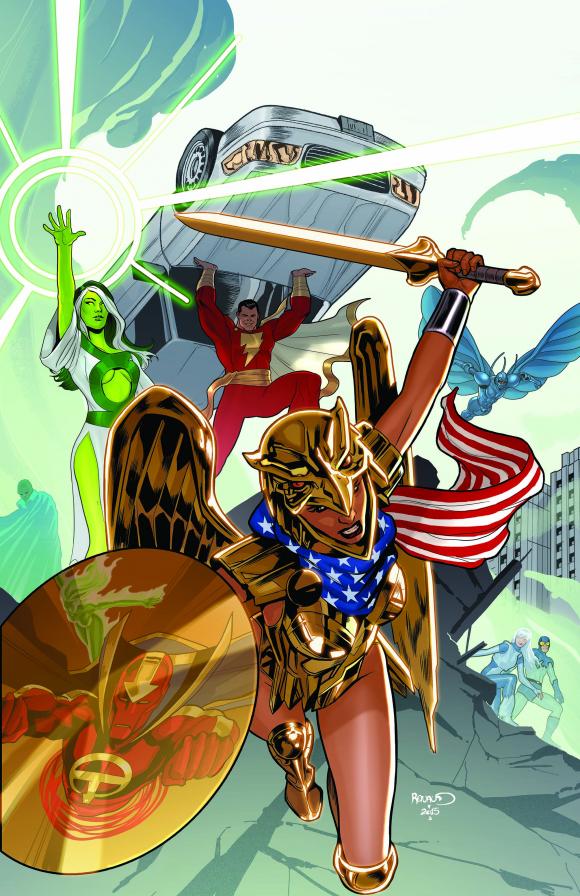 You were already an established, successful professional when Kingdom Come hit, so it maybe wasn't as life-changing for you as it was for people my age or a little younger. What do you like about working with those characters?

Marz: I think there's definitely a line between stuff you experience as a fan, prior to becoming a pro, and stuff you experience once you're a pro. All the comics I love best are comics that came out before I was in the business. Obviously there have been a metric ton of great comics since I became a pro, and I love a lot of them. But it's somehow not quite the same. There's no substitute for experiencing something at that magic age of, say, 10-14 years old. I like the Kingdom Come characters, that's why I included them, but it's not the same as something I discovered during the magic years of youth.

You've said before that you don't like "greatest hits tours." So what makes a project like Convergence so attractive?

Marz: I think one of the advantages in the Convergence titles is that they're just two issues each, so it really makes you focus on the characters. These issues can't sprawl and become exercises in nostalgia. You have to get in, tell your story, and get out. In the age of decompressed storytelling, I think it's refreshing to have two months of tight, character-focused issues.

That said, does that play into why you're not doing the Green Lantern/Parallax issue?

Marz: The Green Lantern/Parallax issues were not offered to me, so it's a decision I never had to make. I'm very happy with the toys I ended up with.

How plugged in are you guys to the main storyline? Did DC give you a lot of freedom to move as long as you arrive where you need to at the end?

Marz: The individual issues get their overall framework from the Convergence series, but we're telling our own stories. So we're definitely playing in a specific sandbox, but it's a pretty big sandbox, with a lot of latitude and flexibility. "Character driven" was the mantra handed down, which is how I've always approach stories. This is a character-driven event, rather than event-driven characters.

Mike, you're one of the guys who was pretty active -- including on some pretty high-profile projects -- around the time this was published. Was JLI ever a book you really hoped to work on?

Manley: Not really, but I loved the run Garcia Lopez did and I did do some boards on new Frontier. I like Martian Manhunter—he's a fun guy to draw and Red Tornado as well—some characters lend themselves to fun visuals. I preferred single character books to draw in the past because of the complexity of the staging. I have done that type of thing in Animation though, as a storyboard artist.

Between the Clone Saga and X-O Manowar, a lot of your old work has gone back into print in recent years for the first time in ages. With that, and this, is there a sense that the '90s just kind of never ends?

Manley: Nothing ever ends in comics, the line is really never broken and 20 years is the nostalgia mark for most fans of anything. Its nice that work stays out there for fans to catch up on. Marvel reprinted Darkhawk and all my Nightfall/End/Quest Batman, etc., work has seemingly always been in reprint. I have new fans now from the reprints and many old fans want commissions now that they are old enough to have good jobs. My work in comics never ended either, I just did more things like work in animation and publish my Magazine Draw! and teach…all comics related. Sometimes people think because you don't do monthly comics you are out of the game, but I have been drawing the Judge parker newspaper strip for 6 years now—so comics have never gone away for me.