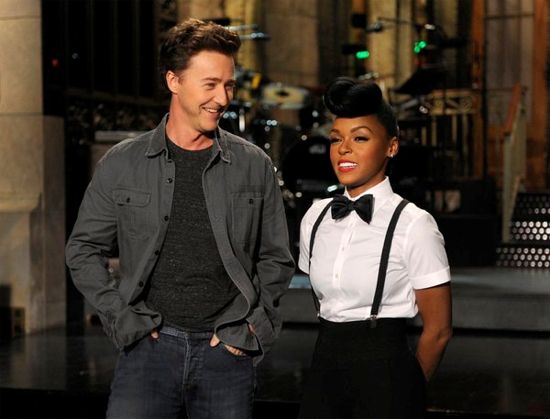 Edward Norton, who played Bruce Banner in 2008's The Incredible Hulk, is hosting Saturday Night Live tonight. The Academy Award nominated actor will be making his first appearance as SNL host. As comic book fans know, Ed Norton was replaced as Bruce Banner by Mark Ruffalo in The Avengers movie. It will be interesting to see if Norton does any skits making light of his days as a superhero on SNL. Norton will next be on screen in the 2014 feature films, The Grand Budapest Hotel and Birdman. Ironically, Birdman is about a washed up actor who once played an iconic superhero, who must overcome his ego and family trouble as he prepares to mount a Broadway play in a bid to reclaim past glory. However, Michael Keaton, who twice played Batman, is playing the washed up actor instead of Norton in Birdman. In addition to Norton making his SNL hosting debut, Janelle Monáe makes her musical guest debut. Monáe is a critically acclaimed singer/songwriter and performance artist whose celebrated sophomore album "The Electric Lady" is in stores now. Saturday Night Live airs on Saturday, October 26, 2015 at 11:30 PM ET on NBC. Check out two sneak preview clips of Norton as host below.