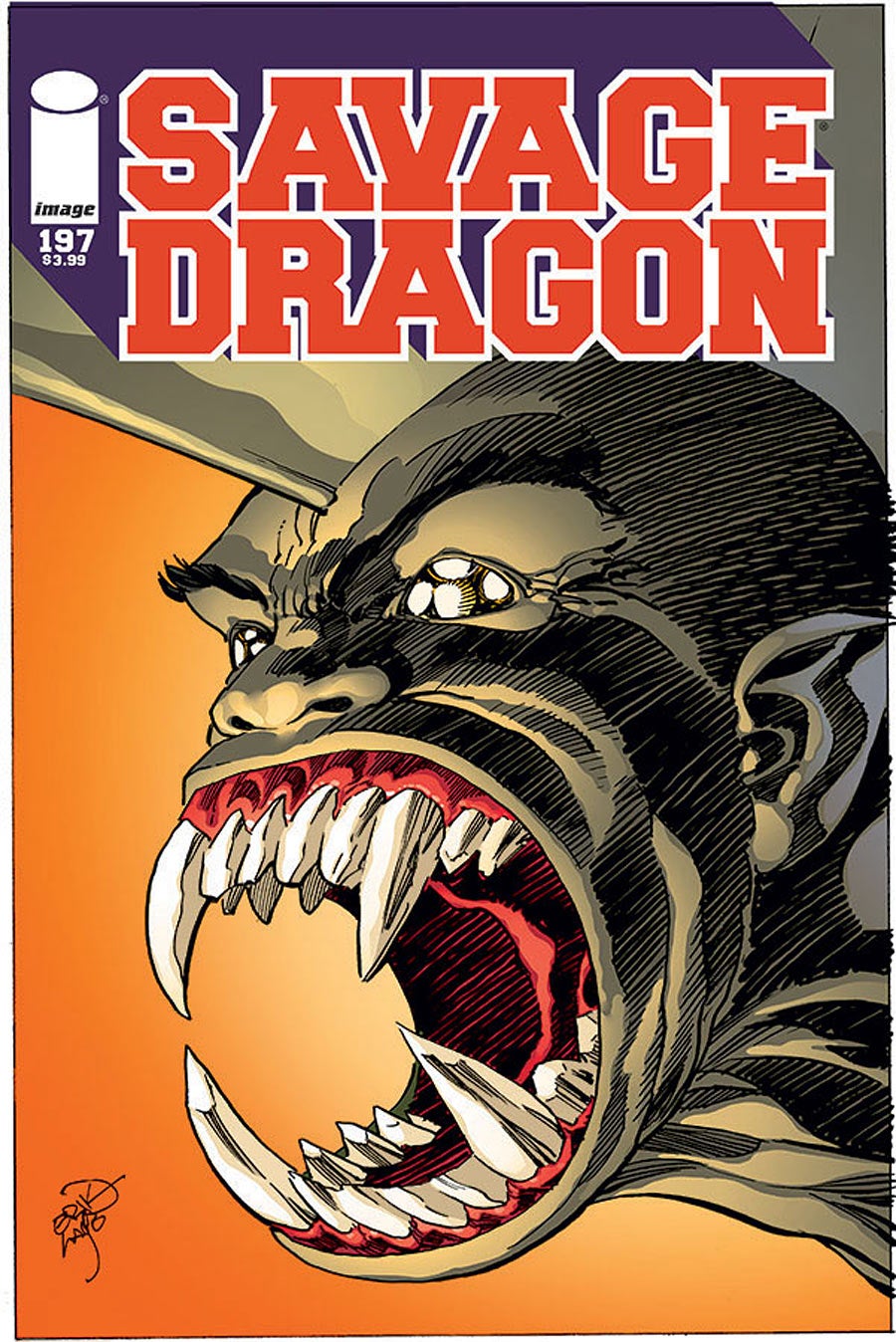 On the same day a pretty obvious Savage Dragon proxy appears in The Multiversity from Grant Morrison and DC Comics, Erik Larsen delivered fans the real deal: Savage Dragon #197, complete with a rather massive shift of the status quo at the end of the issue.

Larsen joined ComicBook.com to talk about the issue, and the build-up to #200.

As always, remember that these interviews are spoiler-filled, and if you haven't read the issue yet, GO BUY IT and read it along with us. 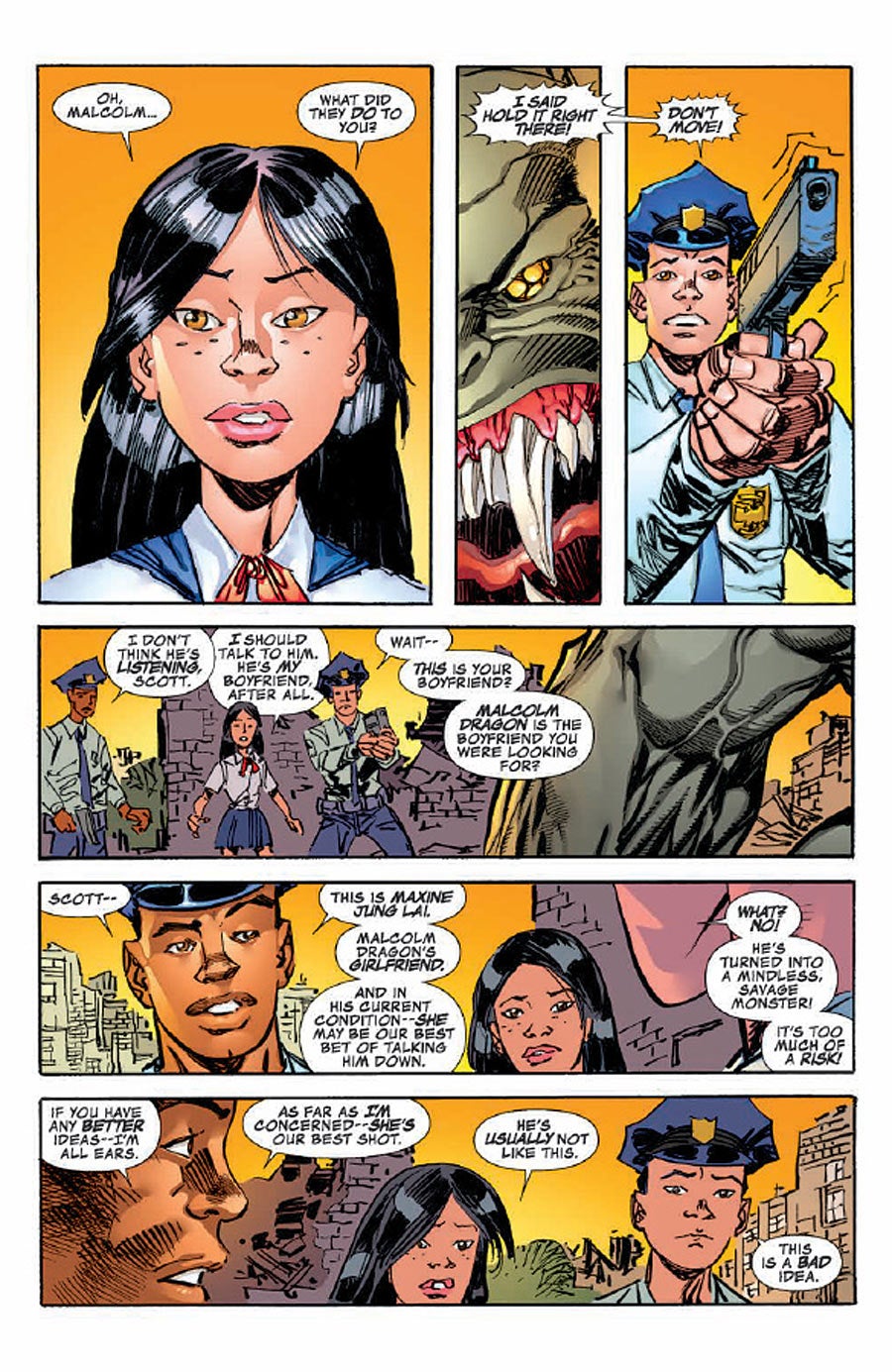 So a good deal of time has passed and as we see this issue, Maxine still isn't totally grown up yet. Do you have an idea in your head about how she's different from her previous publication history?

I tend to not dwell on the differences between the two worlds at this point. If you start reading now--that alternate world stuff tends to get confusing, so I'm focussed on finding the through-line with these characters. The bits from both worlds that coincide. Maxine met Angel when they both started going to school. They were out of touch for a few years but reconnected when Angel got out of Dimension-X and started going to high school. That's really all we need to know. The fact that we met Maxine as a little girl in #68 and we reconnected with her again in #161 doesn't change much.

I love the hand sticking out from under the boulder in the page 2 splash. Was that to remind us that someone's dead under there, or just for your own amusement?

It's there to clarify what happened and establish that there's somebody under there. Not everybody hit was killed necessarily. That's Roughneck's hand and while he is badly beaten--he did survive the battle. Fusion gives the rundown on who lived and died during the fight.

So...Is Bellco based on any particular company?

It's based on all of them. It's one of those companies which puts profits before safety. Take your pick. 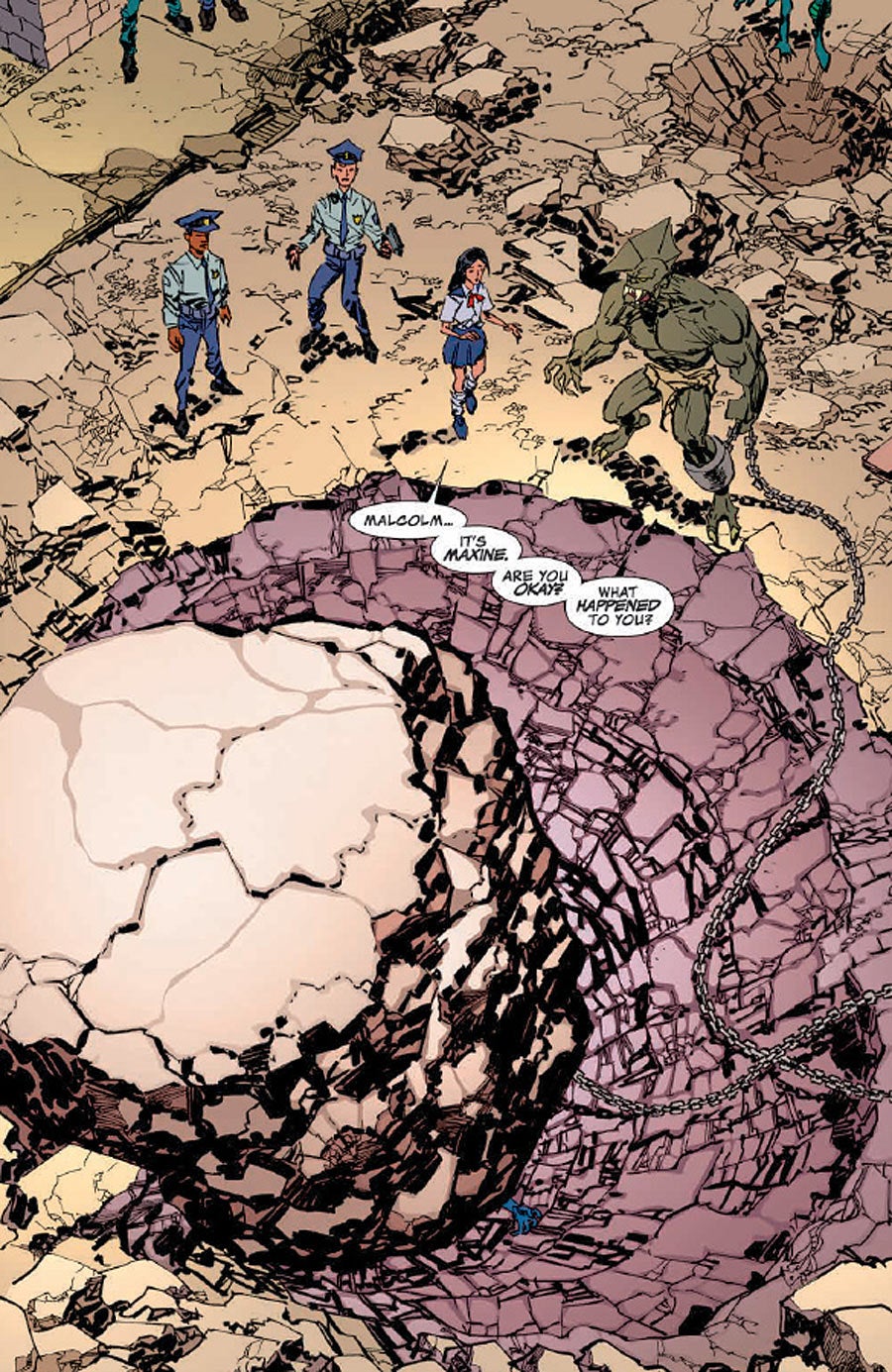 Malcolm's severed foot seemed to grow back very quickly. Was that a result of the extra freak juice?

It was. That was one of the many things we could look at as an indicator that things were not as they were.

This issue killed off a huge number of Vicious Circle guys, as well as dealing Malcolm a pretty big blow. Is there something even bigger right around the corner?

Always. And with the Vicious Circle--there are always plenty more where they came from. 200 plus issues into the book there are no shortage of bad guys.

Malcom has often been depicted as using mostly his Dragon powers, but his mom's abilities are often the "in case of emergency, break glass" stuff. Is this going to change the way he has to fight?

I would absolutely expect it to. He's come to depend on that power and knows that if push comes to shove that he has that in his back pocket. It's his ace in the hole--and now it's gone--and that's going to change things.

And will it have a bit of an emotional toll on him, too, since he has very little remaining connection to his mom?

I'm not so sure about that. 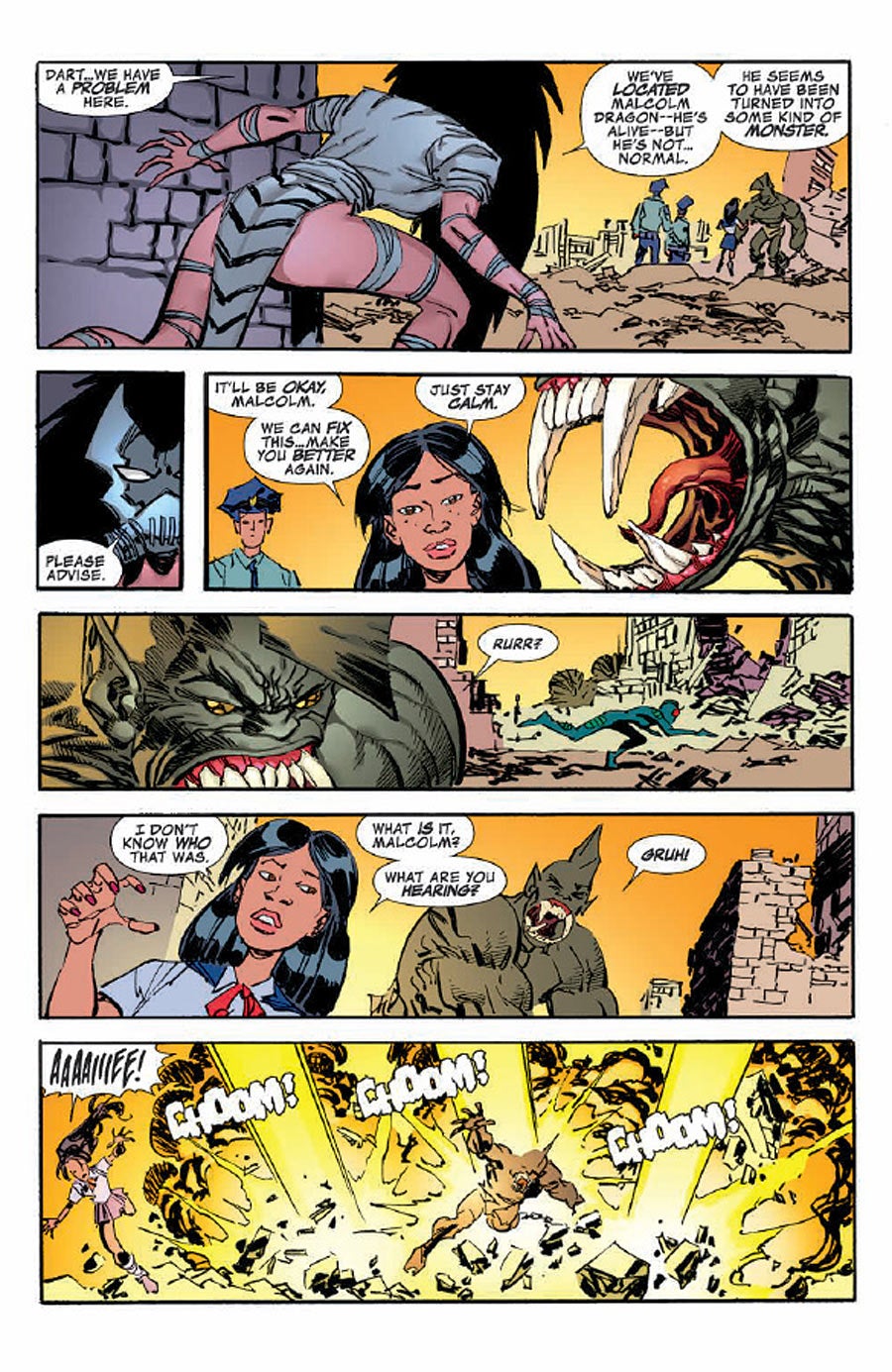 We haven't had a flashback setup at the start of the last two issues. Was part of that device just establishing Malcolm's relationship with his parents for new readers so that this issue made a bit more sense?

The flashbacks will come and go. They're there to establish some back story elements that couldn't be covered otherwise. I used them for the first few issues to establish various relationships--Malcolm's father, mother and major nemesis. I'll likely do others when the time is right. Malcolm meeting Maxine is a likely candidate for that since that scene was never actually shown.

If the hospital is running low on Dragon's blood, who else might have some?

At this point nobody. Dragon himself was changed to become an ordinary Krylan--essentially human--so he's no longer a source. Once it's gone--it's gone.

I know that among some readers, there's still this notion out there that in a pinch, Dragon could nobly sacrifice himself to save his son by getting a transfusion and briefly becoming the Dragon of old. Would you say that's an unlikely way for his story to play out at this point?

I wouldn't say that. That's there if I need it--but that would mean his death. At this point his old blood would kill him in a couple of hours. 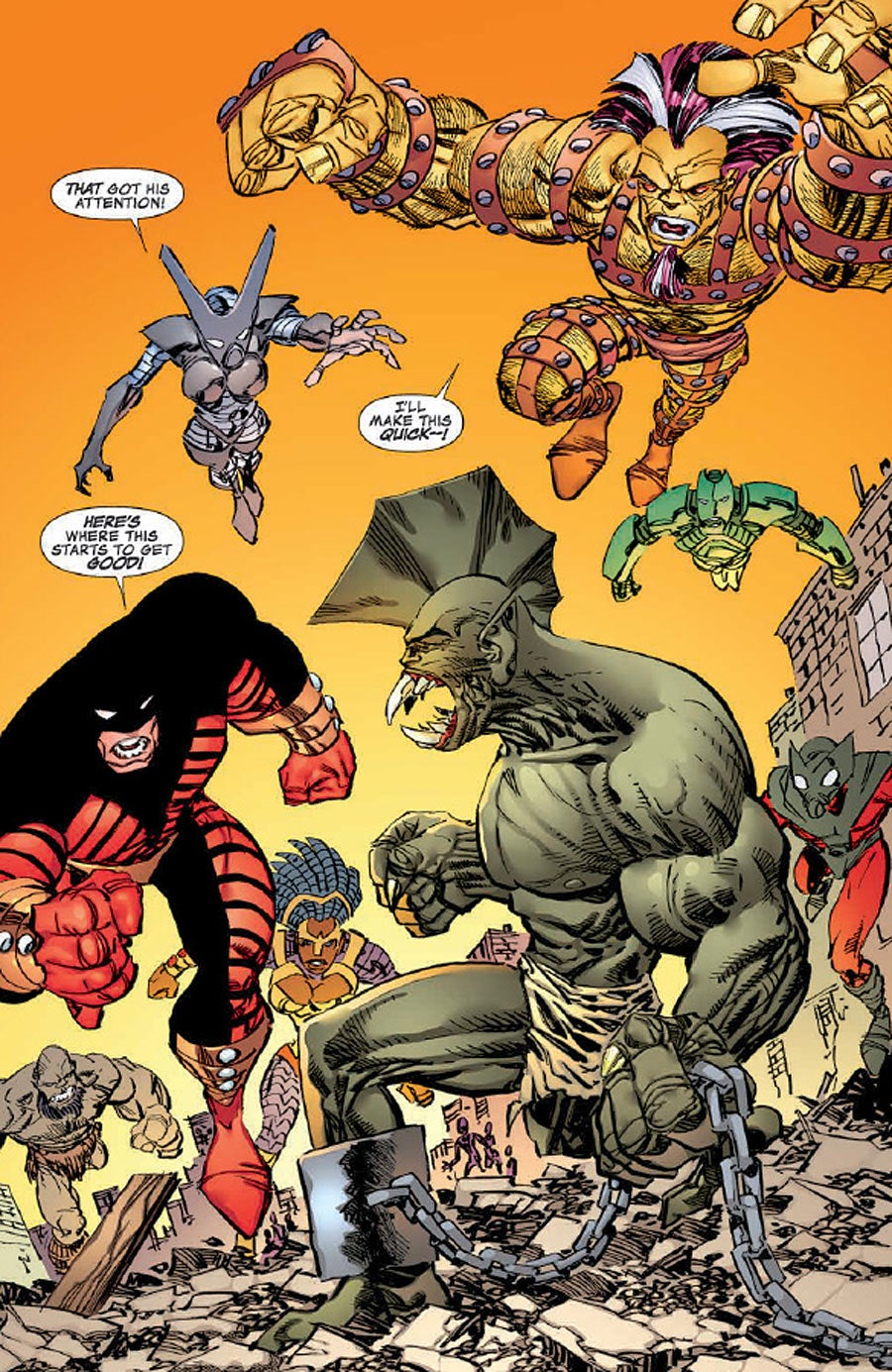 So this issue ends with Dart unconscious, separated from her sword and at least theoretically in custody. Does that leave a leadership vacuum in the Circle again?

At least initially--it would mean her most faithful would do everything in their power to free her.

Will anybody want to break her out? I mean, she's not an easy boss to work for.

She has friends in the group. Her inner circle is pretty much there for her.

Seeing him in a bigger role the last couple of issues -- is it safe to assume that we might see more of him come the post-200 world where, presumably, Malcolm's circle of friends and such will be a bti more well-established?

Frank will be part of the group to some extent, as will Tierra, Frank's wife and Malcolm's ex-girlfriend.

Will we see any more of Zelda, or was her story kind of a means to an end?

Time will tell. At this point I'm thinking her story is pretty much ended.

With Malcolm having not yet banked any blood -- is that just a matter of him not being quite as prepared for the full-time heroing thing as he might have thought?

While Malcolm may look older--he's still a teenager and prone to pulling off stuff. I would think that--for forward--he'd be making more regular visits to Hillman Hospital and giving blood. This is a wake up call.

Obviously when Dragon went on his most recent rampage, he wasn't treated with kid gloves. What are the odds that Malcolm is in for a long process dealing with this issue?

I wouldn't think that the bad guys are too terribly pleased with how things went. That much I know.

Thunderbolts Adds a New Marvel Monster to Its Team Roster

WWE Star Posts Cryptic Tweet, Says They "Know Why" WWE Holds Them Back

Rings of Power: All Confirmed Spoilers for The Lord of the Rings TV Series

Rings of Power Dominates House of the Dragon in Streaming Ratings