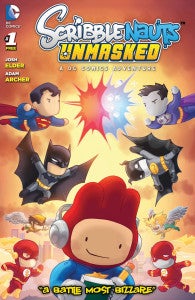 creator Josh Elder will write a new Scribblenauts Unmasked tie-in comic, titled A Battle Most Bizarre, for DC Comics. The digital-first comic will feature art by Adam Archer and will be based on the upcoming video game hitting the stands in September, will launch on September 24, the same day as the game. Fans who purchase the game can redeem a code enclosed with it for the book on comiXology. In the comic, Superman finds himself in a battle with Bizarro and Batman is battling the Joker.  It's up to Maxwell and his magic notebook to restore order and save the world.