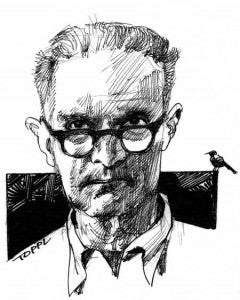 Celebrated Italian cartoonist Sergio Toppi, creator of Collezionista and a number of historical and adventure stories dating back decades, has died. He was 79 years old.

Toppi began his career in advertising art in the 1960s but has created more than 20 books in the last twenty or so years alone, anchoring his career and reputation in cartooning with works like Blues and Little Big Horn. Best known for nonfiction work and standalone stories, Collezionista made its way overseas because it most closely resembled something we might see in the U.S. market. Toppi has been cited by a number of major American comics artists as an influence, including longtime Wolverine penciller Simone Bianchi.

The artist was legendary overseas but is probably best known in the U.S. as much for his personality and reputation as his decades of influential work. Here, Toppi's death will almost certainly be viewed through the prism of the recent deaths of Moebius and Joe Kubert. The first big name in American comics to mention it on Twitter, artist Francseco Francavilla, made the connection himself.

"Jean Giraud, Joe Kubert, and now Sergio Toppi. True legends, giants of comics and illustrations who have left us. I feel poorer now," tweetedFrancavilla. "It's gonna be hard to go back to the drawing table, but I think that's what they would be doing: keep drawing #neverputthepencildown."

Before the U.S. media or Wikipedia had yet caught onto the news, fellow comics artists like David Aja, Eric Canete and Alison Sampson chimed in on Francavilla's feed for details. He shared that the news was starting to break wide in Toppi's native Italy already, and that he had no reason to believe it wasn't true. Shortly thereafter, the only story on Toppi's death to appear on the first page of a Google News search result in the U.S. was timing out, presumably as Lord knows how many Americans tried to find confirmation of the rumors.