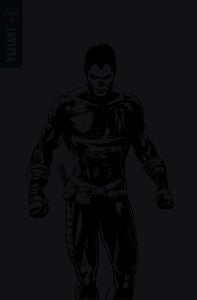 Beginning in September's X-O Manowar #5, Valiant Entertainment will roll out Ninjak in their revitalized universe, bringing the total number of old Valiant Comics stars appearing in their monthly books to at least six.

By November, that number will increase by another one, with the reintroduction of a redesigned Shadowman into the Valiant Universe, as teased by a new visual press release seen at left.

The creative team hasn't been announced, but based on the stylized nature of the teaser and the Valiant logo in the upper-left corner, it looks as though Shadowman might get his own series right off, rather than guest-appearing in another character's book, a la Ninjak.

Shadowman Returns to Valiant in November