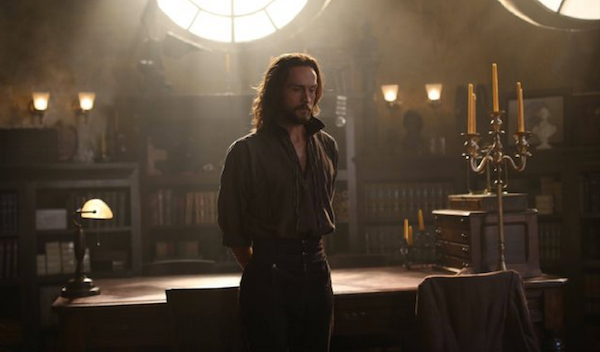 This mid-season episode of Sleepy Hollow, "And the Abyss Gazes Back," opens with Ichabod (Tom Mison) and Abbie (Nicole Beharie) doing torturous wall stands, but Ichabod finds yoga "neither soothing nor relaxing." He's hurt by everything Katrina (Katia Winter) has kept from him over the years and is starting to lose faith. When he gives up on yoga, the two head to a bar.

Meanwhile, Captain Irving (Orlando Jones) argues with Henry (John Noble), furious that his soul has been stolen. Henry offers it back in exchange for the soul of another – the drunk driver who hit Irving's daughter, crippling her for life.

Back at the bar, a fight breaks out between a group of men, one being Joe (Zach Appelman), Sheriff Corbin's son. Abbie used to babysit Joe, but their relationship was strained before he left for Afghanistan. Now back after an honorable discharge, he blames Abbie for his father's death.

Abbie and a very drunk Ichabod are driving home – as he tries to remember the alter ego of Superman – when she gets an emergency call concerning Joe nearby. They get to the scene to find a crashed car with a dead man inside, in addition to a body on the ground that has been ripped open and had its organs removed. Joe gasps for breath nearby leaning against a tree, saying that his father new about what attacked them. He murmurs "this is just the beginning … it's gonna kill us all."

Later when Abbie tries to question Joe, he admits that he felt that his father pushed him away in favor of Abbie, ultimately pushing him to join the Marines. She returns to Ichabod, who's been researching forest-dwelling beasts without luck. He's suspicious of Joe, who claims to remember nothing. When Abbie looks into Joe's military history, they find that his fellow marines were killed in a similar fashion to the men in the forest.

Ichabod finds it suspicious that Joe alleges not to remember anything he saw and thinks that he was involved. Abbie looks into Joe's military history to find that his fellow marines were also attacked by a monster in the same fashion. Ichabod recalls the tale of Daniel Boone, leading him to explain the legend of the Wendigo, a skinwalker that consumes human organs before accepting a human form itself. Ichabod and Abbie are about to head to the hospital when they receive a phone call stating that Joe has left.

They go to Joe's home, where at first they find nothing but video games, which mystify Ichabod. Abbie eventually uncovers Sheriff Corbin's last will and testament on a desk. A note from him to Joe details how he wants his son to protect some powerful objects for him, which is what led Joe to the woods.

In the forest, they find Joe digging in the ground, just before he transforms into the Wendigo. Abbie shoots it down before it causes any true harm, and they take the body to Hawley (Matt Barr), who doesn't have much to add. Eventually, Jenny (Lyndie Greenwood) throws the beast some stolen organs, and after eating them, it turns back into Joe. 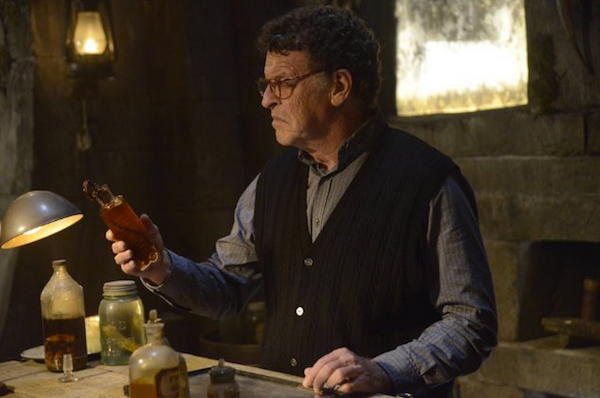 We learn that Joe received a letter while in Afghanistan from Henry, which curses him to become a Wendigo. The letter explained that an antidote could be traded for Joe's inheritance, which is what he was trying to dig up in the forest. Ichabod reveals the wanted object to be an incredibly powerful poison from China. The group realizes that they need to find an antidote for Joe – fast – before Henry finds them all.

They get back to their research. Abbie learns that the Wendigo has four seasons of transformation, the last of which is permanent. Since Joe has already turned three times, the next time would be his last. They need to consult Katrina for help but need the help of one of the Shawnee. Much to the annoyance of Ichabod, the only person who can connect them with the Shawnee is Hawley.

Abbie stays behind and has a one-on-one with Joe about his father. In a flashback, Corbin talks about how much he loved his son, and Abbie admits in the present that it was Corbin's love for his son that made her want the love of a family. Their discussion is cut short by Henry, who's arrived to take the poison. Joe agrees to trade the poison for the antidote, but as soon as they leave together, Henry slits one of Joe's wrists. He says that now Abbie can see him "for what he truly is, a creature of war."

The episode cuts back to Irving, who goes to visit the drunk driver in prison. He extends his hand to the man, saying that all he wants is to know that he is sorry for what he did. Not only does the driver forget her name, but also, he mocks her for getting in the way of his car. Irving snaps and attacks him.

All the while, Hawley introduces Ichabod to his Shawnee contact, Ash, who agrees to help them out after Ichabod shows off his Shawnee knowledge. Ichabod returns with half of a human skull from Ash. It's engraved with a spell, which is antidotal when combined with the afflicted's blood.

Ichabod and Abbie cut open their hands, knowing that the blood will soon attract the Wendigo. It comes after them quickly, and they lure it into a corner. Ichabod begins to recite the incantation once the skull is full of its blood. When it doesn't work, Ichabod wants to kill the Wendigo, but Abbie stops him. Just as it seems that the incantation was said too late, the monster transforms back into Joe.

Abbie shows Joe around headquarters back home, while Ichabod learns the joys of online gaming. Joe admits to Abbie that he'd like to follow in his father's line of work, and she tearfully agrees to put in a good recommendation for him.

Irving calls Abbie from jail, telling her that Henry has his soul. He trusts only her now to help him. Ichabod begs Abbie to give his son, Henry, one more chance, just like she did with Joe in Wendigo-form.

Henry is shown creating a spider from the traded poison, unleashing it on a sleeping Katrina. She's woken up sharply by a bite.

Sleepy Hollow Season 2 Episode 6 With Spoilers: And the Abyss Gazes Back