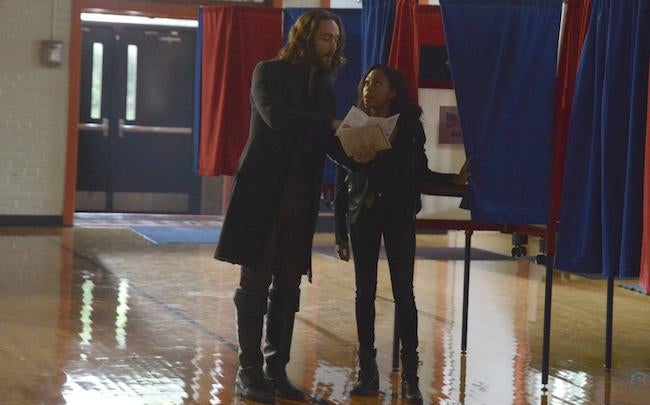 Katrina (Katia Winter) opens this episode of Sleepy Hollow, "Deliverance," with a seemingly peaceful dream. She and Ichabod (Tom Mison) are in bed before he must leave for battle. They cuddle and discuss their future children - before Ichabod grabs her face, staring, and opens his mouth inhumanly wide. Katrina wakes up from her nightmare.

She tells Abraham (Neil Jackson) that she feels poisoned and suspects that he is at fault. He denies it, just as Henry (John Noble) storms into the home with a group of men, sent by Moloch to "care for" Katrina. Abraham throws his axe at one of the men taking Katrina away, enabling her to escape into the street and civilization, before Henry pushes Abraham back into the light.

Meanwhile, Ichabod follows Abbie (Nicole Beharie) to the polls where she is voting for the midterms. He's astounded that so many people choose not to vote, almost as offended as he is by one of the proposals on zoning laws. He feels a bit better once he gets an "I voted sticker," but on the way out, they learn that a redhead in "full colonial getup" has been taken in by the police nearby.

They find Katrina in a nearby hospital, where she has a high fever and a strong infection. She tells them about Henry's men, before she cries out in pain and clutches her stomach. Her veins become a dark, pronounced shade. Ichabod and Abbie dress her in some revealing clothing from the lost and found to sneak her out. They pass a few of the men, splitting up as Abbie follows them.

Ichabod and Katrina determine that the men responsible for her illness belong to the Hellfire Club, who fought for evil in the War of Independence. In Benjamin Franklin's journal, a sickness like Katrina's is mentioned, but Franklin never explains what happened to the infected woman. Katrina tells Ichabod that the amulet around her neck enables her to see the soul inside of the Horseman, Abraham, but she promises Ichabod that she is hiding nothing.

Abbie follows Henry's men to some kind of laboratory. There is a man talking on the phone about an engraved slab, of which Abbie is able to take a picture. Surrounded by cadavers, she stealthily avoids the men in the lab, eventually stealing a doctor's journal. Abbie returns to Katrina and Ichabod. Reading the doctor's journal, they learn that Katrina isn't sick: She's pregnant. 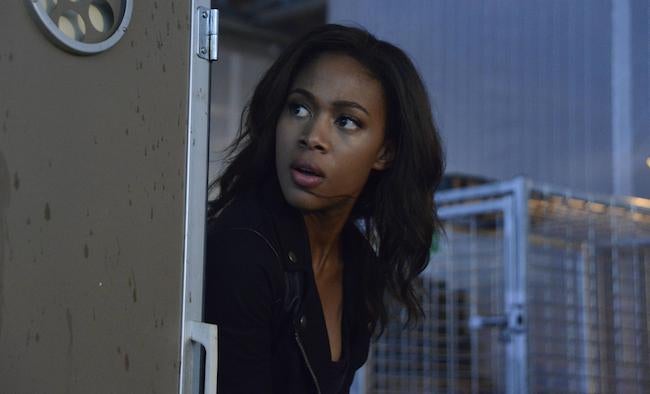 Ichabod immediately expects that she slept with Abraham, but she swears she did not. The journal further explains that the poison Henry obtained in the previous episode (the spider) creates the birthing seed for a demon. Before long they are pursued again by Henry's men, but they escape through the tunnels.

Katrina wants to ask Henry for help. Since he is a Sin Eater, he can get rid of the demon inside her. She reasons that Moloch wants to kill her, not Henry, who is their son. Abbie disagrees strongly, but Ichabod and Katrina beat her in a two-to-one vote. The parents of the Horseman of War think they can bring back his humanity.

Abbie continues to research, learning that the demon inside Katrina isn't any ordinary demon, it's the Horrid King: Moloch. Katrina's power is obviously weaker than Moloch's, so she offers to kill herself in order to delay Moloch's uprising. Abbie is convinced that they will find another way.

Captain Irving (Orlando Jones) calls on his lawyer - Henry - but once he arrives, Ichabod rounds the corner. He questions his son about the demon, and Henry laughs. The demon is no ordinary demon; it's Moloch. Ichabod tries to get Henry - or Jeremy, as they named him - to sympathize for his mother, but Henry stands by Moloch.

When Ichabod returns, Katrina says not to give up hope. Abbie shows him photos from the lab, including one of the tablet and another of their studies of the aurora borealis. He remembers that Franklin that the northern lights banished demons. Ichabod declares "I must Internet, immediately," where they find a code from Franklin. It says that the tablet contains instructions for the birth of Moloch. Luckily, Franklin put a prism inside the tablet. When sunlight shines through the prism, an aurora is created that kills Moloch. 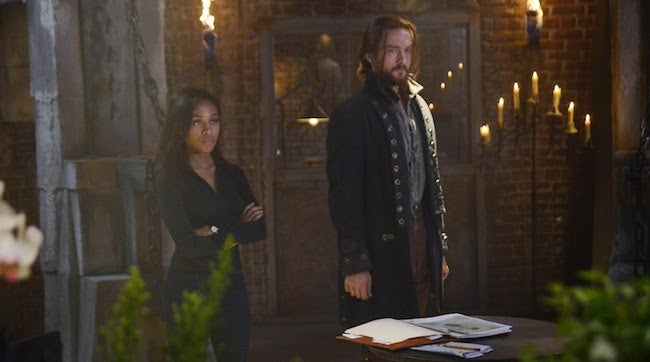 They need help to fight the Hellfire Club, so Abbie goes to Sheriff Reyes (Sakina Jaffrey). The duo tells her about the group, saying only that it's a doomsday cult that tortures people. After a bit of convincing, Reyes, the police, Abbie, and Ichabod all burst into the Hellfire Club. Abbie and Ichabod search for the tablet, while the police pursue the members.

Ichabod tries to guess at the 3-number code that opens the lock securing the tablet. His clever ideas prove fruitless when it turns out that their combination is just "666" - Abbie's idea. They fight of a Hellfire Club member or two and gather the tablet. Reyes meets up with them after, impressed with both Abbie and Ichabod.

There's no time to celebrate. Just as they're leaving, Katrina calls Ichabod on the radio. The baby is coming. When they get back to her, Moloch seems to be ripping out of her stomach. Ichabod smashes the tablet and holds the prism up to the sunlight, creating a bright aurora over Katrina. Some sort of strong, red force struggles out of her body as the light shines over her, until she is pregnant with Moloch no more. At first, the force seems to have killed her, but she survives.

After an intimate moment with Katrina, Ichabod goes outside to talk with Abbie. He seems at peace with his marriage, though they are both rattled at how close Moloch came to surfacing. Ichabod still believes in Henry - citing a very brief moment earlier in the episode.

When Ichabod grabbed Henry's hand, he actually saw one of Henry's memories of being a boy lost in the woods. Ichabod thinks there is still a lost boy hoping to be found deep inside Henry. Abbie is skeptical, but they still fist-bump over a job well done.

In the last seconds of the episode, the red, Moloch force that left Katrina's body is somehow funneled into a jar through a long wire, like lightning to a lightning rod. Henry stands nearby, smiling.