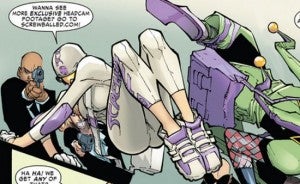 There are some rather shocking scenes in The Superior Spider-Man #6. No, we’re not talking about the violent fight scenes, where some of the punches land, or the last page. We’re talking about the scenes where the villains Screwball and Jester instruct people to "go to screwballed.com now.”

We of course followed their instructions, expecting to find some clever tie-in to the actual comic. However, what we found instead was an online store selling games and comic books. Not just Marvel Comics mind you, but front and center on the site are several titles from other publishers like DC Comics, IDW, and Image Comics.

We checked out the registrar information and confirmed the domain name is owned by an online retailer and not Marvel Comics. It appears the domain was registered on March 8, 2013, so Marvel should have had plenty of time to get the domain name in advance. It's also not like this was a one joke and done thing on one page, because the screwballed.com domain name is 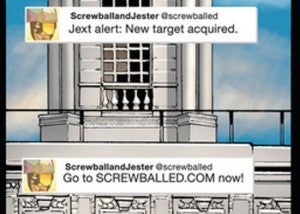 repeated several times within the comic.

Marvel Comics is just lucky that a retailer snapped up the domain name, so at least readers are being directed to a comic friendly site. With a domain name like screwballed.com, there are much worse places that domain could have been directed.

BioShock Creator Could Reveal Next Game This Year

Bram Stoker's Dracula Gets a Wave of Pops at Funko Fair