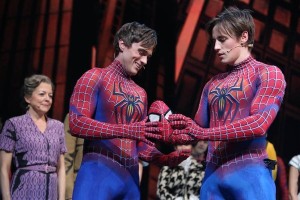 Justin Matthew Sargent, best known for his turn as Drew in Broadway's Rock of Ages, has been cast as the new Peter Parker/Spider-Man in the Broadway musical Spider-Man Turn Off The Dark and will begin his run on tonight, producers said today.

"We looked for our new lead in Los Angeles and New York. During Justin's rehearsals as the alternate Peter Parker/Spider-Man, we realized this is the guy to take over for Reeve. He is one of Broadway's great rockers," producers Michael Cohl and Jere Harris said in a joint statement Monday.

The blockbuster musical Turn Off the Dark features music and lyrics by Bono and The Edge of U2, and a book co-written by Julie Taymor, Glen Berger and Roberto Aguirre-Sacasa, with direction by Taymor and Philip William McKinley. The production has been dogged by high costs and a series of injuries to cast members and stunt performers.

Godzilla vs. Kong Director Reveals the Jason X Reference He Included in the Film