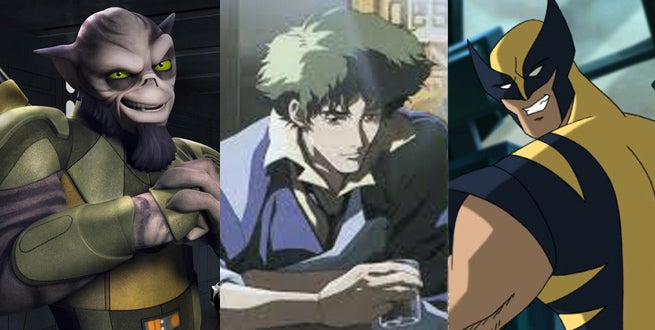 This Star Wars Day, we're spending all day with some of our favorite castmembers of Star Wars Rebels. We talk a bit about Season One, tease a bit more about Season Two, and find out about the next twists and turns on the way.

Garazeb Orrelios, better known simply as Zeb, is one of the few remaining members of the Lasat race, the victims of a genocide by the Empire. The character design of the Lasat is based on artist Ralph McQuarrie's original design for Chewbacca, but aside from his loyalty and strength, the two share little in common.

Steve Blum lends his veteran voice to the gruff Zeb, helping show his determination, his anger, and sometimes even his softer side when it comes to the younger members of the crew. We spoke with Blum at the Rebels Season Two red carpet for more on the character, voice acting, and a little treat featuring two of his other most famous characters.

Steve, you as Zeb got to interact a lot with Ezra, but not a ton with everybody else. Who are you most looking forward to interacting with more in Season 2?

You know, I'm really looking forward to seeing how his relationship developed with Kanan and Hera and Sabine. You're right, he really hasn't had a lot of time with those characters on screen individually, and I'm interested as a fan to see where that goes.

It's interesting, we know that Ezra's parents left or died and that's why he joins up, we know more about Hera and Kanan's backstories from the book and the comic, but we don't know much about where Zeb is coming from aside from his people's merciless slaughter by the Empire…

SB: Right, right. That's a pretty good motivation to become a Rebel though, I would think!

Absolutely. Do you feel like the Rebel crew has shared their personal reasons for being there with each other though? Is that how you approach it when playing Zeb?

SB: I don't know if that's really necessary, because a lot of what's going on for us as this crew is already on a need-to-know basis. That's Hera's perspective, anyway. So I think that a character like Zeb, particularly, is not going to be very forthcoming with his demons, and they're going to have to drag it out of him as time goes on. So it'll be interesting to see how that sort of thing fleshes out.

SB: It took everything I had not to scream like a fangirl when I heard he was coming on the show! I love Dee, he and I have worked on a lot of shows together. We do a lot of creature voices together, we did Boxtrolls [Note: at this point in the interview I slapped my chest like a happy Boxtroll and things derailed for a moment. Moving on], and we did Legend of Korra, we were brothers together on that show. To have him on Rebels is like having a family member come home. It's phenomenal, he really is family to me.

Now that you've been a part of the Star Wars family for over a year, doing this in such a public way, has it changed the way you view Star Wars at all, or how you interact with the fans?

SB: Well, it's humbled me, that's for sure. I was there for the original movie back in 1977, and I've always been a Star Wars fan. Rebels has really opened up my mind to exploring other parts of the Star Wars universe, though; I hadn't really yet! So now I've been watching all of The Clone Wars, and reading some of the books; I'm interested now!

Just seeing the incredible fan response here at Celebration, all dedicated to one franchise, is the most humbling thing. I feel like one teeny-tiny cog in a gigantic machine of a universe. So it's definitely changed my perspective, and it's ever-growing.

Wolverine, Spike Spiegel and Zeb walk into a bar…

SB: Ah… I think ultimately, they would probably have a battle of either wits or stares, but then they'd sit down and have a nice drink of some weird color together. It'd have to be some sort of alien thing.

How do you think that conversation would go (Click the video above for audio of this amazing moment!)?

(Wolverine): Bub, would you move over? You're kinda in my personal space.

(Spike): Um, you know, Space is kinda my place.

(Zeb): I don't have time for either one of you, just drink up, and get out!