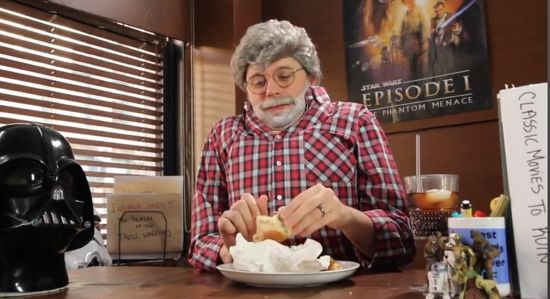 While there is another official Star Wars update video set to be released today, there are also plenty of unofficial parody videos being released. A couple weeks ago Comicbook.com compiled a list of our five favorite Star Wars parody videos to arise out of the Disney and Lucasfilm deal.

If the Star Wars 7 sneak peek from Barely Political had been released earlier, it would also have been on the list. The Star Wars 7 sneak peek parody video takes the approach of George Lucas revealing some information about the upcoming Star Wars sequels, while also enjoying a couple of meals. Some nice touches are that Lucas has a binder labeled “Classic Movies To Ruin” and a folder labeled “Indiana Jones 5: The Realm of the Troll Warriors” on his desk.

The Star Wars Episode 7 sneak preview includes an opening crawl voiced by Goofy. In the new sequel, Emperor Palpatine will apparently team up with Scar from The Lion King, Herbie the Volkswagon Bug, and Captain Hook. They plan to take revenge upon the Ewoks.