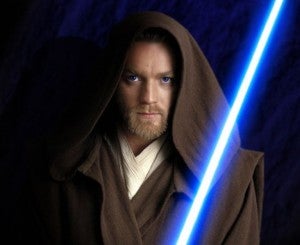 Disney, Lucasfilm, and all the actors reportedly involved in Star Wars Episode VII are keeping quiet, which is probably helping to fuel Internet rumors. Last week, reports surfaced that Emperor Palpatine would be be one of the characters returning for Star Wars Episode VII.

Now, according to Latino-Review, Obi-Wan Kenobi is another one of the characters that will be returning for the next Star Wars movie. Of course, Obi-Wan Kenobi's return raises that same questions as Palpatine's return, since Kenobi is also dead.

As far as the explanation of how he returns, Latino-Review gives a similar explanation as they did when they backed up the Palpatine rumor. Obi-Wan Kenobi will reportedly be returning as a Force Ghost. The information is said to be backed up by three close sources that are on the Star Wars project.

Of course, Alec Guinness, who originally played Obi-Wan Kenobi has passed away, so Ewan McGregor, who played the younger Kenobi, is said to be returning to the role for Star Wars Episode VII. McGregor also reportedly wants a solo standalone film.

Star Wars: Episode VII is scheduled to open in movie theaters during the summer of 2015.