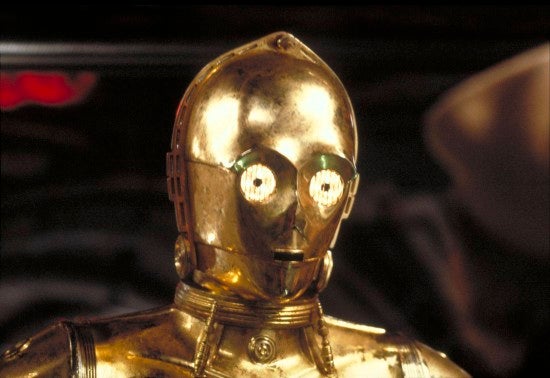 During his Spotlight panel at last weekend's New York Comic Con, veteran Star Wars actor Anthony Daniels reportedly told the audience that he was the only actor in all seven films--before catching himself and scaling it back to the six that have already been produced.

In his defense, it was a loaded question; when he was asked about being the only actor to appear in all of the films, the question was phrased with "seven" in it, so he could simply have been repeating back what he had just heard--but it was the way he reacted to the slip-up--by joking that Mickey Mouse was listening--that suggested to some in attendance, including a reporter from Film Buff Online (via Screen Rant), that he might have had a legitimate slip-up.

Here's the pertinent bits from the Film Buff write-up...

“Walls have ears. And we know what they look like. They’re very big ears…” the man inside the C-3P0 costume stated as to why he wouldn’t be speaking at all about the impending sequel while at the same time pantomiming a set of Mickey Mouse ears… However, towards the end of the panel, Daniels was asked about being the only actor who appeared in all six episodes of the franchise and “maybe seven?”

“Yes, I am the only actor to be in all seven because I feel -” Daniels replied before catching himself. “Six! Whatever.” He then went on to pantomime a call back to his “big ears” comment from the start of the panel.

Now, of course, this is a far cry from a confirmation, but it certainly seems to suggest that someone has reached out to him. As ever in these situations, if he hadn't been contacted it would be easier to just say "nobody has called yet," something that any all-encompassing confidentiality agreement he signed for the previous movies would almost certainly allow.