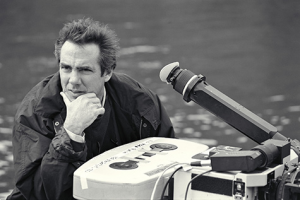 In a story at StarWars.com, longtime Lucasfilm producer Rick McCallum, whose resignation was recently announced very quietly, explained the move.

"It's a producer's job to make possible a director's vision, whatever that may be," said McCallum. "George never let the limits of reality constrain his vision, so the challenge to production was always to find ways to make anything possible, while being respectful to the fact that he was financing his own movies. To do that, we needed to keep that independent filmmaking mentality that requires you to innovate and improvise, while making movies of enormous scale."

"Rick is a close friend as well as an extremely talented producer. No matter how impossible I made the task, Rick was able to overcome the challenges," said George Lucas. "In addition to putting together great crews and working miracles with the budget, he was instrumental in helping push filmmaking into the 21st century. He has a larger-than-life personality and made this amazing 20-year journey with him a fun one."

Lucas added, "We had hit the limit of production technology, and I needed someone with conviction and passion to help us into the digital realm. Rick became an evangelist for the endless possibilities digital technology offered filmmakers. Rick and I fought many battles side-by-side, constantly facing nay-sayers who were convinced we could never make the lasting changes in the movie business that we set out to make. I cannot be more proud of what Rick accomplished. We worked with over 60 companies and hundreds of amazing engineers and artists over a 10-year period to bring about overdue changes: now digital cameras routinely capture images, films are released digitally, and the entire production pipeline maintains unprecedented quality by being digital. As I go off to make my own experimental films -- and I hope to be able to collaborate with Rick again on one of these projects -- I wish him the best and look forward to seeing his new films."

Those projects? A series of independent, politically-tinged films made in Europe.

"I have a Russian film about the Babi Yar Massacre in development that is being directed by Sergei Loznitsa," explained McCallum, who moved to Prague after he and Lucas completed Red Tails, last year's long-in-development historical drama. "I am also working with Tomás Masín on a Czech story about two brothers who escaped Czechoslovakia during the Cold War while being chased by 28,000 Soviet soldiers in what is still the largest manhunt in history. I'm also working on a film with David Oyelowo and developing a film with Laurence Bowen about the Boy Soldiers of Sierra Leone."