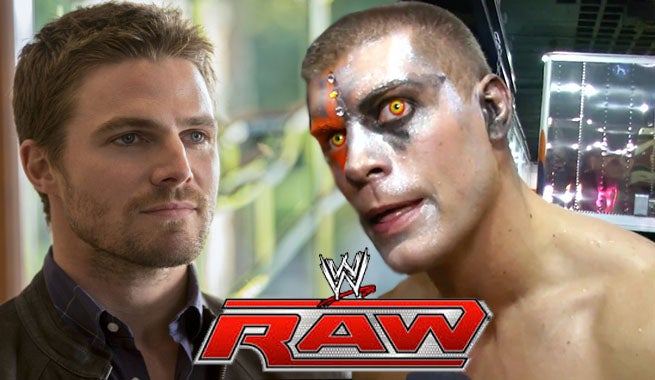 As we reported last night, Stephen Amell and Cody Rhodes, aka Stardust, seemed to have gotten off on the wrong foot when they met on WWE's Monday Night Raw.

Amell, who plays Oliver Queen on Arrow and will soon star in Teenage Mutant Ninja Turtles 2, was greeted with a ringside hiss from Rhodes prior to Rhodes' match. Afterwards, Amell warned Stardust to "tread carefully," on Twitter. However, Stardust has invited Amell back to Monday Night Raw - saying their fates go "hand in hand."

Watch below as Stardust extends an invitation to Amell for a return to Raw.

Stardust referred to Amell as "the man with a bit of an identity crisis," before piling on more insults. He went on to insist, "I know who he really is - he is the Arrow," which is apparently the proton to Stardust's electron. When it comes to returning to Monday Night Raw, Stardust tells Amell, "Please, be my guest."

Has Stardust failed this city? Maybe Oliver Queen will take to the ring to show off his wrestling skills during Arrow's off season. Would you want to see Amell vs. Stardust on Monday Night Raw?