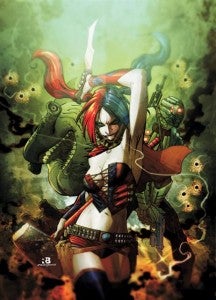 Some of the biggest noise about this book came well before it was even released. Several months ago, just before the 2011 Comic Con International in San Diego, protest and boos erupted over a detail that many may not have expected. Not story direction or a totally new origin for a long established character, but a costume change, for none other than noted Batman villain Harley Quinn. Seeing Harley, the Joker's favorite gal to date/abuse depending on his mood, in a radical change in costume sent some purists into a tither. And while I do have to agree that I'm not a huge fan of the costume, it reminds me too much of those ridiculous Halloween costumes for women based on comic book characters such as Robin. You know, if Robin wore super low-cut tops and a green mini-skirt to fight crime in, it's more about the content at the end of the day overall. With that in mind, let's take a peek at Adam Glass' Suicide Squad #1, shall we?

As any fan of this original series and its more recent incarnation in the AMAZING Secret Six will tell you, there's a lot of complexity to DC's villains and their relationships to one another. Say what you will about dark and brooding heroes with psychological issues to work out, the banter and motivation of villains willing to go on missions for the government that are, dare I say it, "suicidal" in nature makes for compelling reading. Gail Simone made Secret Six so good and readable because number one she's just that good at character development and two the villains she chose were interesting already. Marvel has had an amazing run with Thunderbolts, using the same concept of villains turned heroes. This latest iteration of the group seeks to bring DC another installment of the squad, with a brand new roster of baddies spanning various levels of name recognition and powers, but overall the effect leaves you wishing Secret Six was still in publication.

While this relaunch is intended to wipe the slate mostly clean and "freshen up" the DCU, this first issue doesn't snap the way other books in this similar vein have done before. Featuring Harley Quinn, Deadshot, King Shark, El Diablo and others, the group opens the story by undergoing brutal torture by masked abusers, who take great delight in making them bleed, scream and beg, all in the hopes that one of them will give up information about what their little group is. What follows between the scenes of torture, some creative, some run of the mill, are vignettes of the various members of this group and how they landed themselves behind bars this time. Some are more interesting than others, Harley Quinn's is a bit disturbing, but Deadshot's is pretty run of the mill (arrested trying to shoot someone...shocking).

Woven into all of this is more backstory of how the team ended up captured and in their current predicament. The origin of the team unfolds a little more and in an event that is not too surprising, a la V for Vendetta, the team ends up on the cusp on another mission with massive casualties a possibility. For a book about a group of edgy villains who are considered some of the most dangerous, this is a pretty tame and mild opening. The shadow of Secret Six, the previous edition of Suicide Squad and even Thunderbolts are looming, which may be a bit unfair, but the book doesn't quite have a flavor of its own at this point. Maybe issue two will step it up. Grade: C