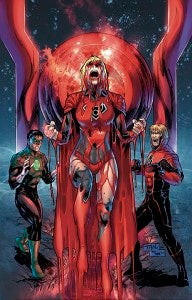 This February, DC Comics will bring Green Lantern and Red Lanterns together for a mini-crossover flipbook in the wake of the "Lights Out" storyline, and the rage-filled team of blood-spewing ring-slingers have themselves a surprising new recruit: Kara Zor-El, better known as Supergirl.

She's been getting more space-savvy in recent times; her new creative team will bring Lobo along with them, at a time when Lobo is being set up for a major storyline of his own with cosmic implications.

Neither DC nor the creative team were talking about the book just yet, but here's the solicitation text for the comic, along with the cover that was exclusively provided to Newsarama, leaving little doubt as to the issue's big story:

GREEN LANTERN/RED LANTERNS #28 Written by ROBERT VENDITTI and CHARLES SOULE Art by BILLY TAN and ALESSANDRO VITTI GREEN LANTERN Cover by BILLY TAN RED LANTERNS Cover by STEPHEN SEGOVIA On sale FEBRUARY 5 • 48 pg, FC, $2.99 US • RATED T Combo pack edition: $3.99 US Don’t miss this amazing flip-issue with two covers at a special price of just $2.99! This DOUBLE ISSUE contains both GREEN LANTERN #28 and RED LANTERNS #28! With dozens of sectors in open rebellion against the Green Lantern Corps, Hal Jordan is faced with a crisis in the sector most important to him: 2814, home of Earth…as well as Ysmault, home of the Red Lanterns. Hal made a dangerous bargain with Guy Gardner, and now it’s time to pay up! Plus: Guy and the Red Lanterns take over policing Sector 2814! And you’ll want to keep reading RED LANTERNS next month to see what happens to their newest member: SUPERGIRL!

Supergirl to Join the Red Lanterns in February