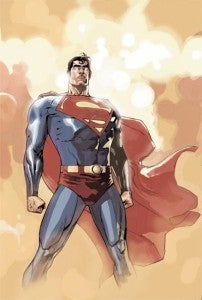 "It's not for me," Mark Waid wrote bluntly about Man of Steel on his blog at Thrillbent.

He added, "It had some very nice moments, several I wish I’d written (and at least three I did, I’m proud to say–there was lots of Birthright in it), but I can’t imagine wanting to watch it again anytime soon. Your mileage may vary. It’s a good science-fiction movie, but it’s very cold. It’s not a very satisfying super-hero movie. That said, if your favorite part of Superman: The Movie was Superman standing in the Fortress while Jor-El lectured him, you’re gonna love Man of Steel.

Waid, whose take on Superman in stories like Kingdom Come and Birthright has been widely considered one of the most iconic and influential in recent years, had braced fans for a negative review earlier today. After attending the 7 p.m. "Wal-Mart screening" in his area, the veteran writer and editor tweeted, "That thunder you heard at around 9:15 EST was the sound of my heart breaking in two."

Since (at least in our area) that film wasn't over at that point, it seemed likely that Waid was likely referring to a key plot beat in the film's third act, which is likely to generate quite a bit of controversy among comics fans. He confirmed as much in the "spoiler portion" of his review, which we won't reprint here for obvious reasons.

While he called the film "disaster porn," though, and lamented all the property damage and loss of life that occurred during a number of key scenes without Superman's stopping it, Waid acknowledged that the film had some redeeming qualities, calling the final battle between Superman and Zod "the very best super-hero fight I’ve ever seen, just a marvel of spectacle." He also said that he "genuinely enjoyed the first two-thirds or so of the movie. Krypton was great. Zod was great. Really, there was a lot to like there. And I got my first of many proud-papa Birthright glows when we cut straight from the rocket’s entry to Clark as an adult, and I grinned like an idiot at the many, many other Birthright moments. I can’t really describe for you what it feels like to me to see evidence that I really have been lucky enough to add a few lasting elements to the Superman myth."

Still, Waid said, he caused a scene in the theater out of disgust at one point in the film and didn't even realize he'd done it until after the fact. And, he said, after that happened, "I didn’t give a damn about the rest of the movie."