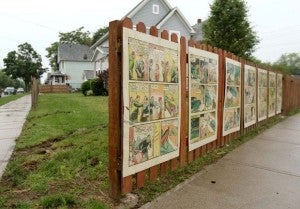 A commemorative fence featuring larger-than-life metal panels depicting the first appearance of Superman in Action Comics #1 was damaged earlier this week when, for the second time in two years, a drunk driver careened through it, crashing down the fence and damaging a number of the metal panels, according to the Cleveland Plain Dealer. The display was created and installed by the Glenville Development Corp. and the Siegel and Shuster Society in 2009. Police say Antwann Houston of Cleveland, was charged with drunk driving, leaving the scene of an accident and driving without a license. Police said he was driving north on Parkwood Avenue when he drove off the road and into the fence about 5 p.m. Wednesday. The fence is located around the boyhood home of Joe Shuster, the artist who co-created Superman and drew the pages depicted on the fence's panels. According to the Plain Dealer, seven of the panels are damaged or missing. The last time this happened, it cost around $2,600 to repair. A previous instance of vandalism involved the theft of a plaque honoring writer Jerry Siegel and Shuster, also part of the display, which was returned three weeks later.