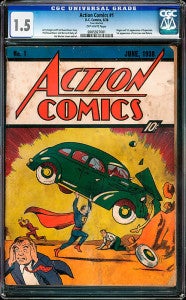 Following the most recent victory for Warner Bros., wherein a case brought against the studio by the heirs of Jerry Siegel and Joe Shuster resulted not just in Warner's rights being affirmed by the court but in some very strong language for their lawyer Marc Toberoff, the families hope to head back to court again.

The latest chapter in the seemingly never-ending battle between the Superman heirs and Warner Bros., DC's parent company, for a rehearing of the November 21 opinion by either the panel itself or the full court, reports Deadline.

That historic change in the copyright laws is what has been the impetus for a number of lawsuits filed by the Siegels, Shusters and a number of other creators and their families, as when the original terms of characters' copyrights lapse, their original creators have the right to petition for the return of rights signed away or sold prior to 1976, on the grounds that before the law was changed, they had no idea that copyright protection would be extended and so the terms of such sales (or of work made for hire deals like most comics) were inherently swung in favor of the buyer/employer by the new law. The petitions have thus far principally impacted DC Entertainment and Warner Bros., since many of Marvel's major characters would not yet have lapsed.

“The Opinion contravenes Section 304(c)(5) (of the Copyright Act), and this Court’s careful holdings … by construing a ‘boilerplate’ release in an irrelevant 1992 pension agreement with siblings, who held no termination rights, to eviscerate the Estate’s valuable termination right,” the petition adds.

Should the case return to court--or even if the Siegel and Shuster Estates should win--it would have no bearing on Batman vs. Superman or other Man of Steel sequels, as those rights were settled. In order to avoid further potential legal entanglements, Warner Bros. actually started production on Man of Steel slighly earlier than they otherwise would have.

Superman Heirs File Motion to Head Back to Court With Warner Bros.