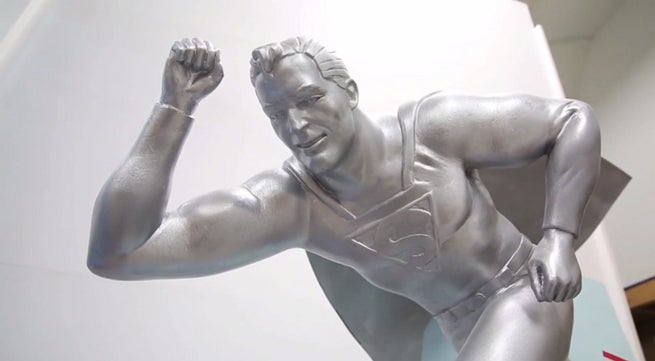 Cleveland, Ohio is finally getting a Superman statue to commemorate the city as the hometown of creators Joe Shuster and Jerry Siegel. The statue will be located near the Rock and Roll Hall of Fame, on an elevated walkway that connects the city’s lakefront to downtown.

"For years people have asked why Cleveland does not have a statue to commemorate the creation of Superman and honor local creators Jerry Siegel and Joe Shuster," said Richard Pace, a founding member of the Siegel and Shuster Society told Cleveland.com. "Now we will.”

Sculpter David Demming has been working on the project for seven years, as part of the Superman Monument Committee. You can see his work in the video below.

The base of the monument will also feature life-size statues of Siegel, Shuster, and Siegel’s wife, Joanne Sigel, who was a model for Lois Lane. The three of them will be looking up at Superman.

“It is very important to get the creators of Superman in it," said Demming.

Superman Statue To Be Erected In Cleveland To Honor Superman Creators