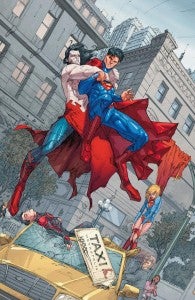 DC Entertainment announced today that the villain introduced in Superman #13 will appear in Superman #14, Superboy #14 and Supergirl #14 this November in a story called H'El on Earth. Described as more powerful than Superman, more intelligent than Supergirl and more lethal than Superboy, H'El sounds like he's got The Eradicator's old pro-Krypton business plan and a physical appearance that looks like the love child of Superboy Prime and Bizarro. But don't take our word for it; here's what DC has to say about the series, as well as the three covers that make up the storyline:

Written by Tom DeFalco and featuring art by R.B. Silva and Rob Lean, SUPERBOY #14 guest stars Supergirl and the Teen Titans. Fresh from the events of SUPERMAN #13, Superman's deadliest new foe comes after Kon-El! Picking up right there, Supergirl too meets the villainous H'el. But what happens when Kara finds herself agreeing with his pro-Krypton/anti-Earth plans? SUPERGIRL #14 is written by Mike Johnson and illustrated by Mahmud Asrar. And in SUPERMAN #14, written by Scott Lobdell and illustrateed by Kenneth Rocafort, the Man of Steel himself will be forced to come face to face with the gang's worst nightmare: a creature of unknown Kryptonian origin who is not only more powerful than Superman, but is also smarter than Supergirl and more lethal than Superboy. How will Superman combat a threat of this magnitude? We don't want to spoil anything so all we can say for now is that his actions will change the course of a planet's fate!

Superman To Cross Over With Superboy, Supergirl in November

The Last of Us Episode 4 Introduces Melanie Lynskey's Character