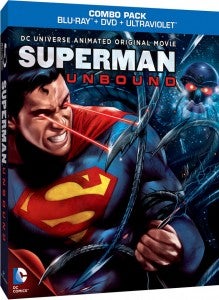 It's late at night on his 75th birthday, but Superman can't take the dentures out just yet. Warner Bros. Home Entertainment have released the first clip from the forthcoming animated feature Superman: Unbound, starring Matthew Bomer as the Man of Steel and John Noble as Brainiac.

In the clip embedded below, the two meet for the first time. The film also features the voices of Castle stars Stana Katic as Lois Lane and Molly Quinn as Supergirl.