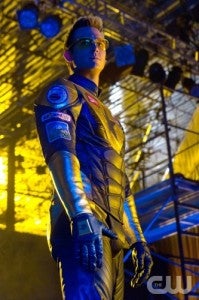 Skeets will be thrilled--The Hollywood Reporter has the exclusive that DC Comics superhero Booster Gold is headed for the small screen. Syfy has ordered a pilot from Fringe writer Andrew Kriesberg (himself no stranger to comics) and Berlanti Productions, who have worked on superhero projects Green Lantern and No Ordinary Family in the past. While Geoff Johns's time-traveling take on Booster catapulted the character into the comics spotlight recently, the description given at The Hollywood Reporter sounds more in line with Dan Jurgens's original run on the character in the 1980s--or at least with the Smallville episode in which soap opera star Eric Martsolf played the character. According to THR, "The story will center on Booster Gold, a washed-up athlete from the future who travels back to the present in hopes of becoming the greatest super hero of all time. Instead of chasing criminals, however, his main priority is chasing fame and money. But Booster Gold discovers that being a hero takes more than just a megawatt smile, and that the future doesn't happen without first protecting the present." Whether the pilot will take any cues from Booster's Smallville iteration is unclear, including whether Martsolf (who ran around the Internet for a while basically daring people to cast him in a pilot for Booster and Blue Beetle) will be offered the role. It's unlikely, given that Syfy is a subsidiary of NBC/Universal, who were not involved with Smallville. That show aired on the CW Network, which recently announced that it will try and breathe some life into a Deadman series while Fox develops The Spectre. As the writer of the long-running column The Gold Exchange at Comic Related and Newsarama, you can bet that I'll be following this story closely; more as this develops.