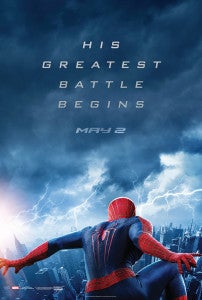 Featuring a view of Spider-Man's new costume from the rear against the New York skyline, The Amazing Spider-Man 2's latest officially-released teaser poster once again drives home that this is a really New York-centric movie.

That stands to reason, since Spider-Man by his very nature is arguably more interactive with the city and its skyline than any other superhero; he doesn't fly above it or skulk in its shadows but relies on the topography of the city to make his powers work.

It's also--despite the fact that almost every Marvel Comics character is based there--one of the only superhero films to shoot almost entirely in the Big Apple.

And of course, this time around, we've got lightning shooting down all over the city. Because, well, Electro is here.