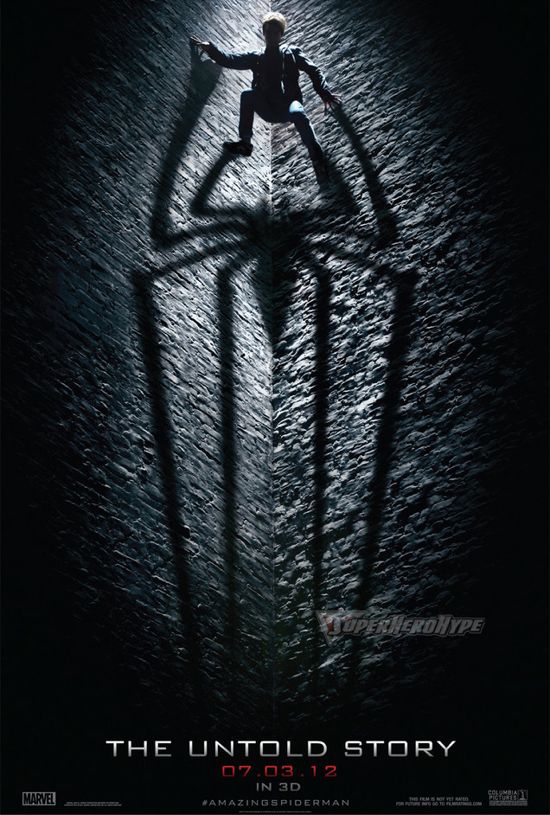 When Emma Stone appeared on Saturday Night Live, Andy Samberg quipped, “Yeah, aren’t you just re-doing the exact same Spider-Man movie from ten years ago?” While Samberg was making his comment in jest, the most often heard fan complaint about the upcoming movie is that it is too soon for a Spider-Man reboot.

Apparently, all the fan comments and jokes have been heard by the executives at Columbia Pictures, because they seem to want to make it very clear that The Amazing Spider-Man will not be just a re-telling of the same Spider-Man origin shown in the 2002 movie. In a new Amazing Spider-Man movie poster revealed on SuperheroHype, the words “The Untold Story” stretch across the bottom of the poster.

In fact, the words “The Untold Story” actually appear in bigger, bolder print than the actual title of the movie, which appears a couple of lines below. These three words have struck many fans as an unusual choice, since Spider-Man’s origin is one of the most widely known of any superhero. Could Columbia Pictures be planning to shake up Spider-Man’s origin?

Despite the controversy and debate over “The Untold Story” tagline, the new poster is actually very visually striking. Showing Peter Parker crouched between two walls, casting a spider shadow is actually one of the best comic book movie posters that we have seen.

The Amazing Spider-Man Movie To Tell The Untold Story