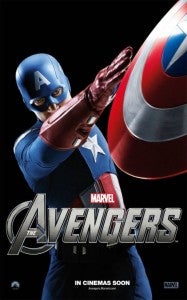 Even though the first official trailer for The Avengers movie gave us a heavy dose of Robert Downey, Jr., it looks like Chris Evans might actually be the central focal point of the movie. In Entertainment Weekly’s 2012 Preview issue, Joss Whedon reveals that the action picks up basically where Captain America: The First Avenger ended.

Whedon is quoted as saying, “So much of the movie takes place from Steve Rogers’ perspective, since he’s the guy who just woke up and sees this weird-ass world.” Even though the movie might be through the eyes of Captain America, Entertainment Weekly does note that “each character carries a more or less an equal share of the film.”

Of course, this new information makes an earlier quote from Robert Downey, Jr. in a past issue of Entertainment Weekly make more sense. Downey, Jr. had said that he told Whedon, “I need to be in the opening sequence. I don’t know what you’re thinking, but Tony needs to drive this thing." He was like, "Okay, let’s try that." We tried it and it didn’t work, because this is a different sort of thing, the story and the idea and the theme is the theme, and everybody is just an arm of the octopus.”

So it looks like Whedon might have tried making Iron Man the focal point, before going with putting the focus on Captain America. It will be interesting to see if every character really does get an equal part of the film. Just from photos and other material released so far, one would think that Captain America, Thor, and Iron Man take center stage with Hulk, Black Widow, and Hawkeye playing more of a back-up role. The Avengers movie is scheduled to be released in theaters on May 4, 2012.

The Avengers Movie Told Through The Eyes Of Captain America