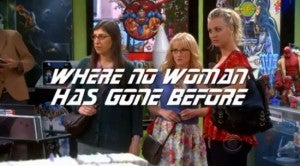 The hit CBS sitcom The Big Bang Theory is often the source of some heated discussions in comics corners.

To its fans, it's fun to see a version of themselves and their friends depicted on TV, albeit in a way that's exaggerated for comedic effect. Representation (and especially relatable representation), they argue, is something that the "geek"/"nerd" subculture has never really had in mass media.

To many others, too many of the show's jokes appear to be at the expense of the characters and the subculture they embody; the term "nerd blackface" first appeared years ago in a critique of the show and has never really gone away, regardless of being accused of being overly harsh by the show's fans, or racially insensitive by other critics.

The message is that while The Big Bang Theory may not be openly cruel to the characters, that doesn't make its message any less overt. By stripping the characters down to a series of stereotypes for cheap laughs, it dehumanizes them and the people the showrunners have openly tried to embrace as "their people."

Last night's teaser trailer for the next episode, though, seems to have gone one step farther than usual and is drawing criticism from the entertainment press that generally like the show, and people who self-identify as fans of the sitcom.

You may have noticed that when we posted the Star Trek: The Next Generation-themed teaser ad yesterday, we didn't comment much on the second half of the ad, which focused around the show's female leads entering the comic shop and preening before a stunned group of men shocked to see women enter the building. Tying into the Star Trek theme, the voice-over and caption (as seen above) was that they were going "Where no woman has gone before." We weren't particularly impressed, but we also didn't anticipate that we'd wake up today and so many people would be talking about it.

The trailer has ruffled a few feathers, alternately for its tone-deaf depiction of male comic book fans, for insulting comics retailers by implying a woman would never been seen in their store and of course for marginalizing female comics fans, still stinging from the recent spate of "fake geek girl" outrage. All in all, it left a bad taste in a lot of mouths, for a variety of reasons, in a very short amount of time. It's actually kind of impressive.

Over at io9, they ran a story covering the "preposterous" question of whether women would ever ACTUALLY go into a comic book store, saying, "We all know The Big Bang Theory isn't afraid to push boundaries in its hard-hitting, yet scintillating look at nerds and nerd culture. But in this Thursday's episode, the show may have gone too far as it presents the utterly ludicrous premise that a girl — several of them, in fact! — would willingly go into a comic book store! Silly girls! There are no clothes or make-up in there! Just boys, who are unable to function socially with members of the opposite sex, to the point that merely seeing females puts them into a catatonic stupor! Because they're nerds! Ha ha!"

"Seriously, 'where no woman has gone before'? For a show that claims to understand nerds, it really doesn't," wrote Buzzfeed, adding, "It would be acceptable, perhaps even funny, had they phrased it 'where none of THESE women' have gone before. But that is not a broad enough generalization obviously, so the show falls back on the 'girls don't go in comic shops ever for any reason ever even on pain of death never ever.'"

The Buzzfeed article also linked back to a popular blog post, written in September, which has been making the rounds whenever The Big Bang Theory runs afoul of its target demographic. In the post, posted to Shouting at the Void, the basic premise is that The Big Bang Theory isn't about friends sitting around the table making fun of their friends; it's a show written by creators and for an audience who would be the first to gleefully stuff Sheldon and friends into a high school locker.

From the blog in question: "What [The Big Bang Theory creator] Chuck Lorre wants us to find funny is not the jokes which the characters are making, it’s the characters themselves. At one point Howard mentions playing Dungeons and Dragons. There is no joke attached to this, it’s not the punchline to any set up, however it is treated as one. Howard says the words 'Dungeons and Dragons' and the audience laughs. They’re not laughing at a joke, they’re laughing at the fact that Howard plays D&D. And this kind of thing happens all the time throughout the show. How many times has a joke been made out of Leonard owning action figures or Sheldon collecting comics? When, in season one, Penny invites the guys to her Halloween party and they are excited about making costumes, we’re supposed to laugh at them, to think they are silly for dressing as a Hobbit or Thor when everyone else is trying to look sexy. The reason I feel uncomfortable watching The Big Bang Theory is because it’s laughing at me, at people like me."

For our part, we talked to a few comics retailers about their perception of the ad.

Recently an ad exec came into our comic store to see if we wanted to buy commercial space during Big Bang Theory. She proceeded to use an iPad to show us a segment of the popular series where stereotypical "nerds" spoke in stereotypical tones in a comic store. The ad exec pointed at her screen and said "Hey! Look! It's you guys!" My reply consisted on an eye-roll and a polite thank you for dropping in.

Here is a bit of a bombshell for some but that show does NOT encapsulate most of the comic reading public, the intellectual community, or even "nerds" in general.

On a personal note, I dislike Big Bang Theory and think it is dated and out of touch with reality. Check your Facebook. How many of your friends are connected to "I F***ing Love Science?" Likely, a bunch because scientists and innovators of technology are the new rockstars.

Check the profiles of the hottest, sexiest girls on your Facebook. If they name their top 5 favorite shows, the vast majority of them will list The Walking Dead.

Of course, I don't have to check Facebook because I own a comic store and guess what?

Drop dead gorgeous knockout women are in here EVERY DAY.

Less and less are buying stuff for their boyfriends every day too.

I have long detested The Big Bang Theory because of it's silly and irresponsible portrayal of nerds, but it doesn't offend me because the real truth is that the entire comic industry from the writers and artists to the retailers are actually the architects of cool in society. Comics become the biggest blockbusters in theaters and everything cool next year is everything on my stands this year.

So sorry TBBT but you missed the mark again.

Martin A. Kinney of The Comic Shop in Oswego, New York:

Well, our store is owned by a woman. I haven't seen the ad. Clearly, it is playing to the stilted angle that the show uses to portray "comic geeks". Plenty of young lady's and women shop at our store. We have a varied a demographic of consumers. In CBS's defense they might not realize that it is possible attract a diverse consumer base since they cater solely to the elderly.

Jared Aiosa of Heroes Your Mom Threw Out Comic Shop in Ithaca, NY and the Hero Bot Con:

It's about sensational television. If a family was to sit down, eat dinner and talk about their day - would that be boring? Instead, they have to argue, throw food and pull hair.

So, if the girls from the show walk into a comic book store. And an employee smiles & greets them. Then asks if he could help them find a particular book.

Answers questions about buying a gift or a book for themselves. Maybe that would be boring tv. When in honesty, it could be closer to the truth. If they walked into a good comic shop.

The problem is - some independent stores - game shops, record shops, comic shops Sometimes are like that scene. A girl walks in and the place freezes. So, sadly, stereotypes are sometimes true. And the show grabs the worst stereotypes and runs with them.

Years ago, most comic fans were happy and surprised to see a show that discusses 'fandom.' Now, most don't watch it anymore. It's just a collection of stereotypes about 'pop culture.'

Like the other person said. Most people are watching The Walking Dead instead.

That statement isn't true for me. I have always had female customers. Mostly manga readers. But in the last few years I have seen more girls than ever reading all kinds of titles from Avengers to Walking Dead.

The Big Bang Theory Controversy: Girls In A Comic Shop