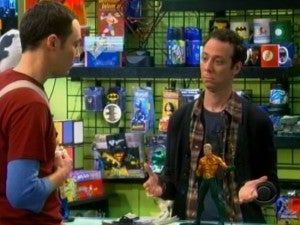 Poor Aquaman, he never gets any respect. On the Season 7 premiere of The Big Bang Theory, even Sheldon Cooper made a diss on Aquaman. Since his roommate Leonard was returning after being away at sea, Sheldon paid a visit to the comic book store to buy him a coming home present with a nautical theme.

Comic book store owner Stuart suggested, “Well, I don’t know how much you want to spend, but I do have this pretty cool Aquaman statue.” To which, Sheldon quipped, “Aquaman? This isn’t a gag gift, Stuart.”

Of course, Stuart quickly turned the tables on Sheldon by telling him that it was a pretty rare piece that he would rather sell to a real collector anyway. To which, Sheldon insisted, “I’m a real collector. How rare is it?” After some haggling back and fourth, Sheldon wound up buying the Aquaman statue for $1,200 for himself and picking up a Batman squirt gun for Leonard instead. 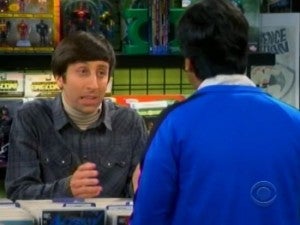 In addition to the Aquaman joke, The Big Bang Theory also addressed a recent Spider-Man controversy. While rummaging through some back issues, Howard asked Raj, “What were they thinking putting Doctor Octopus' mind in Spider-Man’s body?”

However, Raj defended the change. Raj said, “I’ve been quite enjoying that. It combines all the superhero fun of Spider-Man with all the body switching shenanigans of Freaky Friday. Both versions, original and Lohan.”