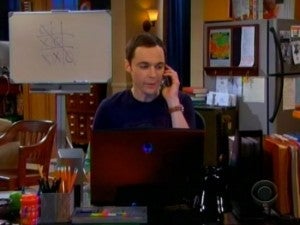 "The Closure Alternative" episode of The Big Bang Theory dealt with an issue many of us can relate to: the lack of closure after the cancellation of a favorite show. At the beginning of the episode, Sheldon Cooper learns that the SyFy channel canceled Alphas after the second season. Sheldon is upset because the show ended with all the residents of New York either dead or unconscious, which means he'll never know what happened. An outraged Sheldon tells Penny and Leonard, "I'm going to get the number of the SyFy channel and give them what for. They can't just cancel a show like Alphas. They have to help the viewers let go. Firefly did a movie to wrap things up. Buffy the Vampire Slayer continued on as a comic book. Heroes gradually lowered the quality season by season until we were grateful it ended." Sheldon then attempts to what any hardcore fan of a canceled TV series would do. He calls the network and pretends to be the vice-president of programming ordering that the show be put back on the air. After that doesn't work, Amy attempts to teach Sheldon how to let go, which doesn't work either. Finally, Sheldon takes the next step that many devout TV fans have probably attempted. He tracks down the writer of the show by calling everyone with the writer's name in the phone book. Upon reaching the Alphas writer, Sheldon asks, "Your show ended on a cliffhanger. Could you please tell me how you planned to resolve it?" After listening intently, Sheldon says, "Well, that all stinks, no wonder you got cancelled." Of course, viewers were only able to hear Sheldon's side of the conversation, so there is still no revelation as to what happened on Alphas. However, Alphas fans can at least take solace in the fact that whatever was going to happen in season three really stunk.

Super Smash Bros. Ultimate Director Reveals How Nintendo Got Sora in the Game

Batwoman Recap: Everything You Missed in "Loose Tooth"

World of Warcraft Changes Another Controversial Name in Latest Update