On his Facebook page earlier today, DC Entertainment Co-Publisher Dan DiDio was asked whether there was any possibility of seeing a series based on John Blake, the Gotham City police detective who appeared in Christopher Nolan's The Dark Knight Rises, in which he appeared as Batman. And his response was surprising.

"A series of books?" DiDio responded, "let's see how he does on his first mission."

Certainly that response--as well as the fact that DiDio's Facebook page is not an official venue for DC news--leaves quite a bit of room for interpretation, but it's hard not to take that as an implication that the Co-Publisher anticipates the character popping up in the comics sooner than later. The fan who asked the question did so in two parts, with the "as Batman" appearing second, so while it's vaguely possible DiDio was teasing the possibility of a Blake-as-Batman story, it seems more likely he's just suggesting that the detective could make an appearance soon. 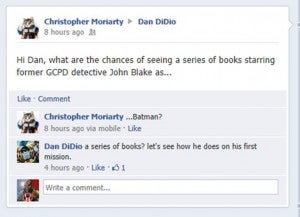 While Nolan is the one who gave Blake his personality and has made him a fan favorite, the character was not created by the filmmaker, per se. A police officer named John Blake first appeared in Detective Comics #255, a single appearance. It was widely speculated in the run-up to The Dark Knight Rises that Blake might be a cover identity for Dick Grayson, Tim Drake, Jean-Paul Valley or another well-known Batman ally.

Elements of each of those characters appear to have been applied to the final character, but certainly he was enough his own man to stand as a new character if they chose to introduce him--and if traffic patterns on our site are any indication, people have interest in seeing more John Blake.

The Dark Knight Rises' John Blake to Join the Comics?