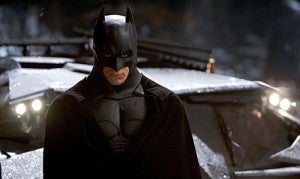 Bat-fans, set your DVR for June 3, becuase the MTV Movie Awards will be the setting for that all-too-rare beast: new footage from Christopher Nolan's third and final Batman film, The Dark Knight Rises.

The film won't be in theaters until July 20, but the Caped Crusader will be coming to cable (say THAT five times fast) as part of the annual awards show. Unfortunately,according to Batman scribe Scott Snyder, Batman and Robin won't be eligible for the coveted Best Kiss award.

MTV News reports (in what is essentially a press release, except written by the news site) that the film's stars and director will be  on-hand as well for the screening, saying,

"We are proud to announce that this year's live broadcast will feature the debut of exclusive new footage from one of the summer's most highly anticipated movies, "The Dark Knight Rises." And if that's not exciting enough, the film's writer/director Christopher Nolan and stars Christian Bale, Joseph Gordon-Levitt and Gary Oldman will be on hand to introduce the never-before-seen footage. If you've been following the news surrounding Nolan's third and very likely final Batman film, you know that plot details have been kept under lock and key, so any chance to see anything new from the film ahead of its July 20 release is definitely cause for celebration."

Chris Jericho On Working With Mike Tyson: You Don't Give Him A Script

DC Cancels Over 20 Comics From Their Upcoming Schedule