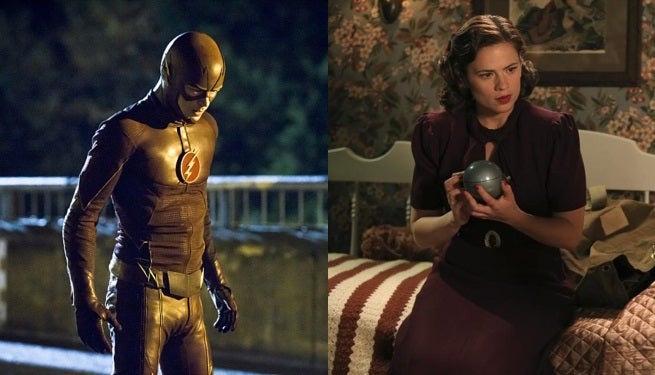 Tuesday turned out to be a downer of an evening for superhero genre television, at least in the ratings, with both The Flash and Agent Carter seeing significant dips.

The Flash debuted, comic book villain and Rogue, the Pied Piper, but it wasn't enough to buoy the speedster's ratings. The Flash series premiere was the most watched telecast ever on The CW, but this week's episode came in with a 1.3/4 rating, a drop of 7 percent from last week.

Meanwhile, over at ABC, Agent Carter brought back Dominic Cooper as Howard Stark for an episode that touched on the shared Marvel Cinematic Universe. However, like The Flash in the timeslot prior, the episode only garnered 1.3/4 rating, dropping 13% from the series' previous new episode, which aired on January 13.

Television lineups in general were a little weak last night. ABC, in particular, buffered Agent Carter with rerun episodes for both lead-in and follow-up. The similar ratings suggest that, without much of a draw otherwise, it was only the comic book faithful who showed up for Marvel and DC television last night, with more casual fans passing on the evening.

The Flash airs Tuesday nights at 8 p.m. ET on The CW.

The Flash And Agent Carter Slip In Ratings