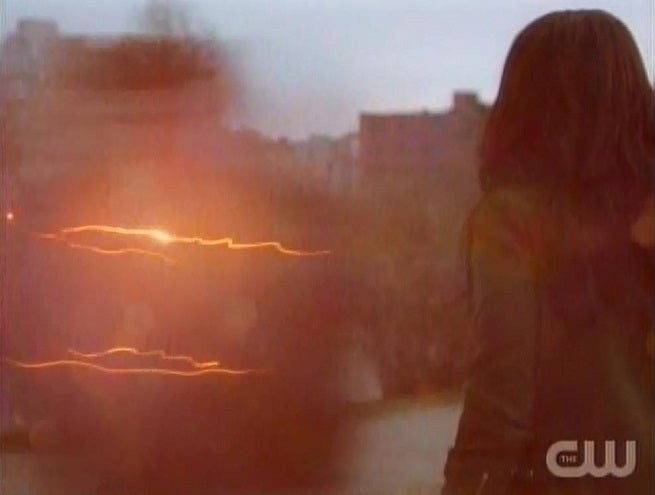 Tonight's episode of The Flash, titled "Out of Time," was pretty crazy...but one area where it predictably lagged was in the fanservice that often defines some of the quieter moments on this show and Arrow.

When action is moving frantically, it's often difficult to get in the clever little winks and nods that we tend to keep track of here. Still, there were some things worth mentioning tonight...!

First...a little something from one of our regular readers:

@russburlingame West and Eddie went into apartment 123, Flash 123 was the introduction of RF, not sure if you caught that Easter egg

Note: As noted in the comments, #123 is actually the first appearance of Earth-2, not Thawne.

The pilot, of course, featured Clyde Mardon, whose brother is the bad guy in this week's episode. As in the comics, The Weather Wizard has a brother. They reused some footage from the pilot to make this episode work, along with some footage from the midseason finale for the Reverse Flash projection inside the force field.

The idea of using speed to approximate being in two places at once is referenced early in the episode as a potential explanation for Barry seeing himself...and then actually used by Zoom.

The real question, of course, is whether it will have any longish term impact

It isn't Pied Piper this time, but we get to meet Captain Singh's fiance. Somehow people wanted me to mention that he's "confirmed" as gay (which of course he is in the comics), even though he had mentioned being gay in a previous episode and we noted it back then.

So we finally discover which Reverse Flash Harrison Wells is.

More on that here, and more on the character in the comics here.

The death of Vibe

Vibe (Cisco Ramon) is a character who many fans of a certain age might best remember as a dead guy.

When he and Gypsy died in the Detroit Era Justice League, it left an indelible mark on the team, the book and DC's fans. But those characters...well, less of a mark.

Hey, I've seen one of those before.

Of course, yes, in the comics Weather Wizard wields his own wand (say that five times fast), whereas here, it's being used against him.

"I will watch every episode of The Walking Dead with you."

This is the kind of fun pop-culture reference that the comments thread overflows with if we don't mention it.

Yeah...even money that will never happen.

We've seen in the PaleyFest ad that Reverse Flash meets up with Mason Bridge, and while it's certainly possible that occurs AFTER the story runs, it seems more likely that a result of Barry's time travel is bad news for Iris' mentor.

The Flash: Easter Eggs and DC Comics References In "Out of Time"