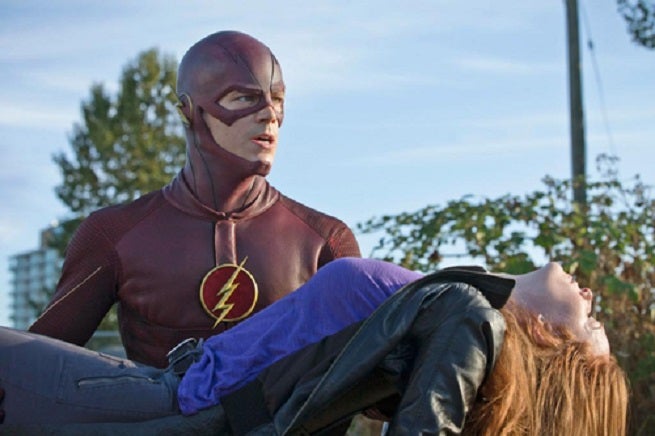 Kelly Frye's iteration of Plastique is in pretty rough shape in the first official look at her character from The Flash, just revealed over at TV Guide.

With the U.S. elections causing The Flash to take a week off on Tuesday, the next episode will air on November 11 and feature guest stars Frye and Clancy Brown, who will play General Eiling (DC Comics villain The General).

An interesting choice for Veterans' Day.

KELLY FRYE GUEST STARS AS DC COMICS' PLASTIQUE AND CLANCY BROWN GUEST STARS AS GENERAL EILING - After a bomb goes off downtown, the army, led by General Eiling (guest star Clancy Brown), rolls in and takes over the case, much to Joe's (Jesse Martin) surprise. Suspicious, Joe tells Barry (Grant Gustin) that he and his friends at S.T.A.R. Labs should look into the army's involvement. Wells (Tom Cavanagh) informs the team that Eiling was experimenting on his men to turn them into super soldiers. Cisco (Carlos Valdes) confirms one of Eiling's soldiers, Bette Sans Souci (guest star Kelly Frye), was at the bomb site. The Flash tracks her down and realizes that she's not setting off the bombs, she is a meta-human who can blow things up just by touching them. Meanwhile, when Joe learns Iris is writing about "the streak," he tells Barry to make her stop. Barry realizes Iris won't listen to him so he decides to have The Flash pay her a visit. Dermott Downs directed the episode written by Aaron Helbing & Todd Helbing & Brooke Eikmeier (#105).

The Flash: First Look at Plastique