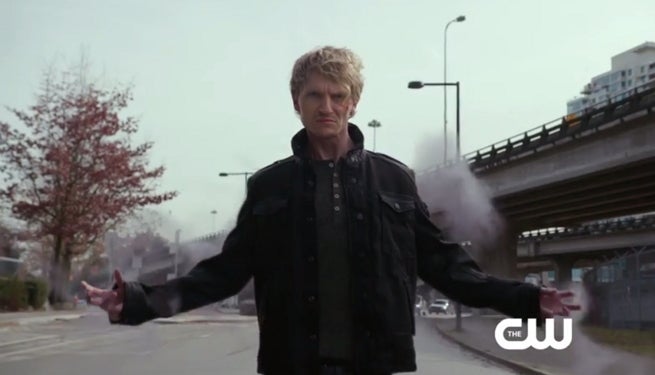 On his Twitter account, The Flash pilot's villain has made a few statements this week that may hint at a return to the hit CW drama.

Asked on December 7 whether he might return to The Flash, actor Chad Rook responded with "Keep watching," an interesting tease considering that he appeared to have been killed at the end of the series premiere.

Well, today he added these two tweets to the mystery:

Holy crap!! I just read a script that you fans are going to FU#%!*G LOVE!!! #ComingVERYSoon

Update: The first of the tweets above has now been deleted.

While "_____ City" isn't actually enough characters for "Central City," his other recent credits don't appear to include anything that would fit better.

Many fans had speculated that, rather than bringing back Rook's character, the "real" Weather Wizard might turn out to be his character's brother, who also appeared to perish in the same small aircraft crash that they believed had killed him.

The Flash returns in January with new episodes Wednesdays at 8 p.m. ET/PT on The CW.

The Flash: Is "Weather Wizard" Chad Rook Teasing A Return?