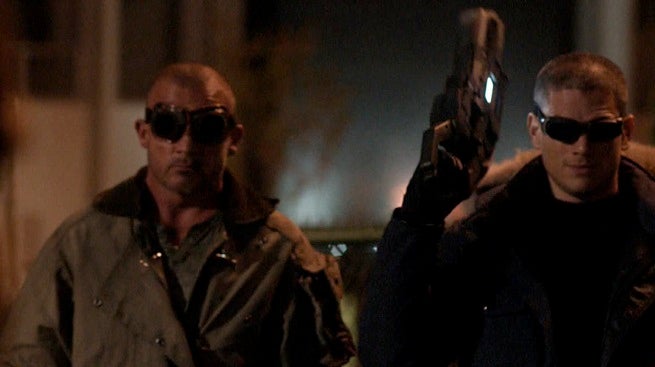 Prison Break alumni Dominic Purcell and Wentworth Miller will reunite onscreeen as Captain Cold and Heat Wave, taking the fight to Central City in January 20's midseason premiere of The Flash, titled "Revenge of the Rogues."

The CW has released the official synopsis for the episode, which also deals with his efforts to train up to face the Reverse-Flash.

WENTWORTH MILLER AND DOMINIC PURCELL ("PRISON BREAK") TEAM UP AGAIN AS CAPTAIN COLD AND HEAT WAVE CHALLENGE THE FLASH TO AN EPIC BATTLE — Leonard Snart AKA Captain Cold (guest star Wentworth Miller) returns to Central City with a new hotheaded partner in tow – Mick Rory AKA Heat Wave (guest star Dominic Purcell). The duo plan to steal a multi-million dollar painting, but Cold has another agenda while in town – to set a trap for The Flash. Snart and Mick kidnap someone close to The Flash and threaten to kill them unless The Flash shows up for a battle of fire and ice. Barry tells Joe (Jesse L. Martin) he isn't sure he should take on Snart again after the casualties that happened the last time they fought. Meanwhile, Barry asks Dr. Wells (Tom Cavanagh), Caitlin (Danielle Panabaker) and Cisco (Carlos Valdes) to help him double his training efforts so he's ready for the Reverse Flash when he returns to Central City. Iris (Candice Patton) deals with the aftermath of Barry's confession, and Cisco makes the CCPD a new shield. Nick Copus directed the episode written by Geoff Johns & Kai Yu Wu (#110). Original airdate 1/20/2015.

Xbox Game Pass Getting One of its Highest-Rated Games Yet