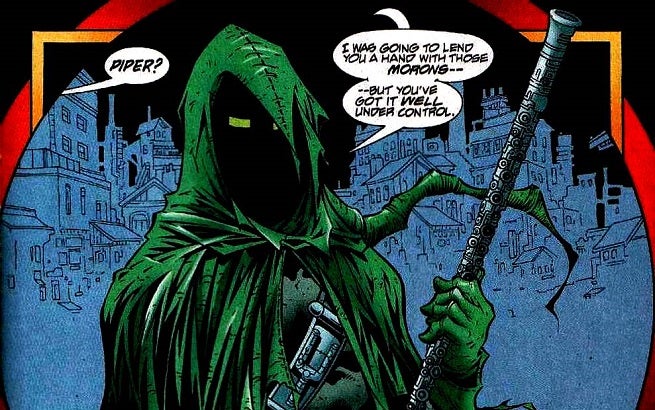 The Flash and Arrow are currently filming their eighth episodes, in which the two shows will cross over for a week in December -- but what's next?

According to TVLine, for The Flash, it's the Pied Piper, who will appear "at midseason," which we're assuming to mean in the midseason finale that will be filming next week.

Here's the exact verbage from the article, which raises some interesting points:

In addition to the likes of Captains Cold and Boomerang, at midseason we will also meet Hartley, a onetime mentee of Dr. Wells' who lost his hearing in an accident and now is out to wreak havoc with an invention of his own. (Of course, you may know Hartley — who happens to be gay — as the Pied Piper.)

This confirms that one of the previously-reported two gay characters will be Piper, but giving him a past with Wells might beg the question: has the other one been a member of the principal cast all along and we just didn't know because it never came up? That would arguably be a bolder choice than introducing him as "the new gay character."

It's not likely, though; that will probably be David Singh. But anytime I hear two characters have a past and they COULD theoretically have had a relationship, that's the first place my mind goes.

It's long been assumed that Piper would appear in the show -- partly because of the "prominent gay character" rumors and partially because he's a key member of the Rogues, who are set to appear this year.

It's also worth noting that the current version of Pied Piper in the New 52 isn't deaf; that's from a previous interpretation of the character. Whether we might still see Piper and Singh enter into a relationship or not is hard to say when they're apparently cobbling together elements from different takes.

The Flash: Pied Piper Confirmed, And Some Questions Raised