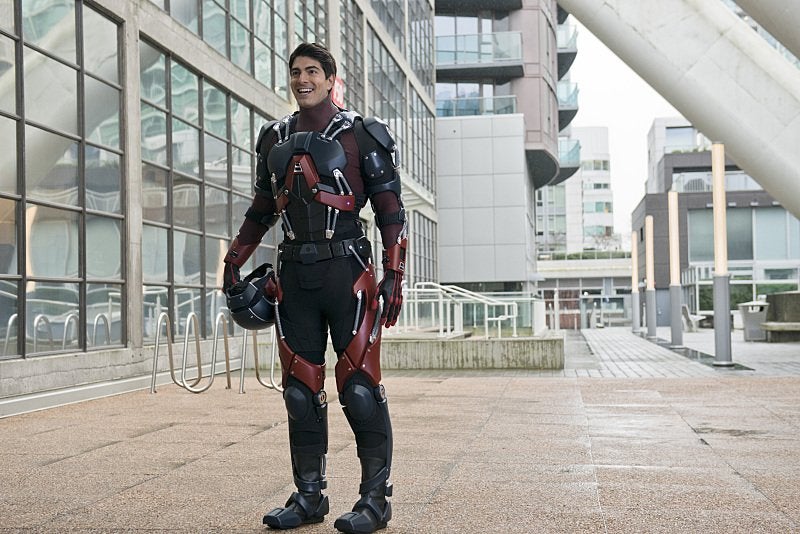 "All-Star Team-Up" opens with Eddie and Joe pursuing robbers in their police car. Joe calls the Flash, who ends their car chase far ahead of schedule. As Joe and Eddie continue stopping crime while on patrol, the Flash keeps aiding them in a series of lighthearted moments.

Across town, things aren't so cheeky for a woman named Lindsay, who enters her car at night. When she gets in the car, a swarm of bees come through the vents and sting her to death. When Joe and Barry investigate the death scene the next morning, Joe asks Barry to run some forensics at STAR Labs. They then discuss Harrison Wells, and Joe questions if Cisco and Caitlin are in cahoots with the Reverse Flash. Barry doesn't believe what Joe says, but Joe warns Barry from telling Cisco and Caitlin what he knows about Wells.

At STAR Labs, the team goes over possible causes of Lindsay's death. But then, Felicity Smoak appears from Starling City with a surprise visit. She asks Cisco, Caitlin, Harrison, and Barry to come outside. Outside, Ray Allen flies down in his Atom suit. Felicity tells Barry that Ray is her boyfriend, which prompts a little jealousy.

Inside the the lab, Cisco and Felicity tune-up Ray's suit, and Ray proclaims his superhero identity as the Atom. Harrison offers to help Ray improve his suit, but Barry feels reluctant. Sensing his hesitance, Felicity asks him to talk things over with Barry at Jitters Coffee.

Across town, Iris visits Eddie at his office. Sensing Eddie's recent distance, Iris asks him what he his hiding from her. But, Eddie doesn't reveal that he knows Barry and Flash are the same. Eddie tells Joe that he wants to let Iris in on their Flash secret, but Joe tells him not to. At Jitters, Barry is about to tell Felicity about Reverse Flash, but Eddie barges in. He asks Felicity what he should do about Iris and his' rough patch, and Felicity suggests a double date with herself, Eddie, Iris, Barry, Ray.

At STAR Labs, Ray says something that triggers a memory in Cisco, causing him to remember his encounter with the Reverse Flash that was seemingly wiped from the time stream. But the flashback is cut short when Caitlin picks up a report of another bee attack. The Flash races to the swarmed building, but is overcome by hundreds of bees, who can form shapes. They quickly subdue The Flash, and carry his body outside the building, where Joe finds him. Barry enters a heart attack, but Wells is able to save the Flash by activating a remote defibrillator in his suit.

Saved, Barry and Joe return to STAR Labs. Cisco takes blame for misdirecting the Flash and allowing him to get stung, which causes Barry to ponder Joe's earlier words about Cisco. The gang must leave for their double date however, leaving the rest of the team in STAR Labs with one of the killer bees.

At the double date plus-one dinner, in a restaurant that Ray decide to just buy (as billionaires do) Iris and Eddie passive aggressively argue over their trust issues. But Barry can't focus on anything, feeling ill, and excuses himself. Felicity follows him. Barry then tells her that he knows Harrison is the Reverse Flash. He shares his theory that Caitlin and Cisco might be helping Reverse Flash. When they return to the dinner table, Eddie and Iris keep fighting. Eddie refuses to share his secret with Iris, and Iris leaves dinner early, saying that she'll stay with Joe.

Felicity gets an emergency call from STAR Labs, where Cisco, Harrison, and Caitlin flee from the killer bee. Flash races over and captures the bee before it can sting anyone. Once it's captured, they realize that the bee is actually a robot. And naturally, the robot bee comes with a camera. As it records the gang observing, the Bug-Eyed bandit watches them from her based.

The team cross-references the bee's victims, where they find that they all worked at Mercury Labs. Harrison goes to see Dr. Tina McGee at Mercury Labs and asks what she may know about the two victims and mechanical bees. Tina figures out that murderer must be Brie Larvan, an old Mercury employee who invented the bees before Tina fired her for misusing them. Joe then says that Tina will be her next target, and asks her to be safe. Tina rejects the offer.

Back at the restaurant, Felicity tells Barry to trust Cisco and Caitlin, despite his hesitance. Barry seems to take her advice. Barry returns home to find Iris. She asks Barry what Eddie could be hiding from her. Barry says that Eddie is probably just dealing with an ugly case, and would rather not talk about his dark work.

Inside STAR Labs, the captive killer bee is reactivated by Brie. But by reading the bee's internal directive, Harrison finds out that Brie's swarm of bees are heading to Mercury Labs to kill Tina. Ray and Cisco dub Brie the Bug-Eyed Bandit. Ray offers to save Tina, since his armor will protect him from the bee's stings. Barry will pursue the Bug Eyed Bandit at her remote location.

Brie is about to murder Tina with her remote bees, but the Atom arrives and lures the bees away. Ray loses the bees and crash lands into a van Cisco is driving. When The Flash confronts Brie, she summons another swarm of bees. Flash runs from the swarm, but they pursue him doggedly. Luckily, Felicity intercepts the bees' radio frequency with her impressive hacking skills, and shuts them down.

But it's not over yet. One of the bees, still attached to the Atoms' suit, stings Cisco. Cisco goes into shock, but The Flash races over. He restarts Cisco's heart using the super-vibrations of his hands. The next day, Tina McGee visits Barry to apologize for not taking the CCPD's protection. Barry uses the opportunity to ask why her and Harrison's relationship soured. She explains how after Harrison's love died, he "became a different person" (not knowing that Eobard Thawne took his place). Joe enters, and says that he know thinks Cisco is innocent.

Barry says goodbye to Felicity and Ray, who head back to Starling City. Iris visits Eddie at his office again, and says that Barry has vouched for Eddie's recent distance. But, Iris gives the ultimatum that if Eddie doesn't tell her what's going on, she will break up with him. She leaves Eddie to let him ponder his decision before making it.

At STAR Labs, Cisco and Caitlin meet Barry and Joe at Barry's office. Barry has something to tell them. He lets them in on his secret investigation, and says that Reverse Flash and Harrison Wells are the same man. Caitlin isn't convinced, but Cisco says that he's experienced "dreams" where Harrison Wells is the Reverse Flash, and kills him. That seems to have changed her mind. With the entire gang on board, the final investigation into the Reverse Flash begins.