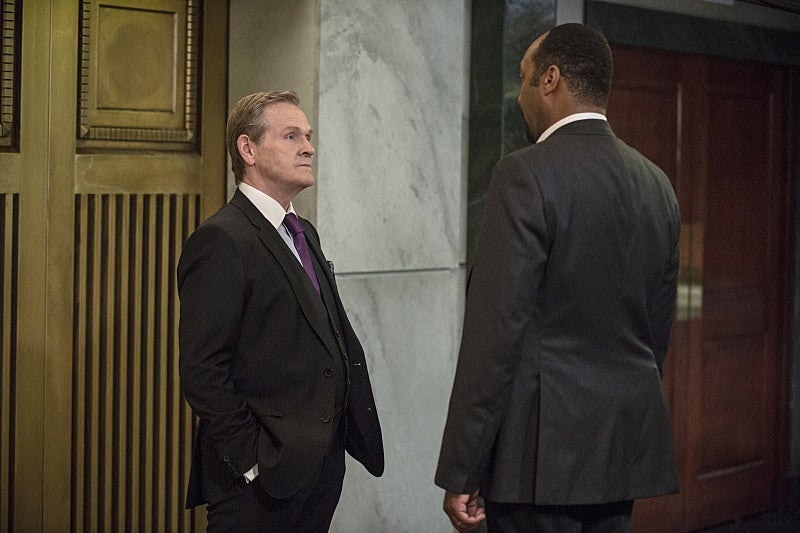 Barry is running towards a fire in downtown Central City, going 352 mph while Cisco monitors him. After Barry overshoots the fire by six blocks, he backtracks. Caitlin catches Cisco and is not happy. Barry meanwhile finds a child in the burning building and speeds her out, followed by two other people. Once everyone is free and Barry is around the corner, he calls in to Cisco, only to be on the receiving end of Caitlin's anger. Barry is about to run back to STAR labs, only to be overcome for a few seconds by a dizzy spell.

Caitlin is upset that Barry is out being a hero. He reminds her that they agreed to work together, but she says that was only to find meta-humans, not to deal with crimes and fires. Well joins the conversation, and while he does not specifically tell Barry to stop, he does advise caution. They are all aware that Barry's vitals spiked for a few seconds while he was out, but Barry lies and says that everything is fine. Joe calls Barry from a murder scene, wanting to know where his CSI is. Barry speeds out, and Wells wonders when Barry will realize he forgot to his clothes.

Outside the crime scene, Barry realizes he is still in his Flash gear, and takes note of a clothing store nearby. Barry walks to the scene, where Joe and the Captain take note of the price tag on his jacket. Eddie shows with surveillance footage, showing one attacker. However, Barry is hopping around the shoe tracks around the body, and says there were at least six attackers. All wearing the same shoes and with the same shoe size, the same as the Captain's. Barry realizes what he said and backtracks, embarrassing himself further.

At the precinct, Joe is angry at Barry for his behavior. Barry tries to lighten the mood by admitting he can run a mile in three seconds, but Joe sends him to work, helping them catch the killer.

In a flashback to Barry's childhood, Joe tracks Barry down after the boy ran away to visit his Dad. Joe tells Barry that he can't see his Dad, and young Barry tells Joe that he is not his father and yells "I hate you!"

Barry is in his lab when a machine breaks. Barry uses his super speed to shake the chemical vial he was testing, achieving the needed result. He has another dizzy spell, but again, it fades quickly. Iris comes in and complains about her journalism class and reminding Barry that he promised to help her write an article on a presentation by Simon Stagg. Eddie enters, and after watching them play it cool, Barry reminds them that he knows about them and they can kiss. They do, and Eddie thanks Barry for not telling anyone. He knows it must be hard for Barry to keep a secret like that.

In a big speech, Stagg reveals his newest breakthrough, which involves creating organs for transplants, instead of taking them from another body. Iris thought that Barry was avoiding her because he was uncomfortable about Eddie. He reassures her. Iris tries to get a quote from Stagg, but is put off by his bodyguard. Several men with guns enter, dressed exactly like the killer from the surveillance tape earlier. One of them insists on everyone handing over their jewelry. A security guard enters and tries to stop the robbers, but they shoot at him. Barry speeds the man to safety and starts to follow the robbers, only to be overcome by another dizzy spell and faint.

Iris wakes Barry. He covers by saying he was just trying to get the plate number and confesses to fainting. They go inside, where Joe and Eddie are investigating. Joe overhears the guard talking about what happened, and quickly figures out what happened. He pulls Barry aside and scolds him for trying to be a hero. He makes Barry promise to stop.

At STAR Labs, Caitlin is furious that Barry didn't tell them about the dizzy spells. They decide to test him by tracking his vitals while Barry runs on a treadmill that Cisco tricked out to handle Barry's speed. At first his vitals seem fine. But then Wells notices a problem with Barry's glucose levels, right before Barry goes flying off the treadmill.

Joe goes looking for Barry at his lab, and finds his hidden board with all the information he gathered about his Mom's murder.

In another flashback, Joe comes home and sees Iris. He asks where Barry is, and while Iris lies at first to protect Barry. Joe sees through it though, and Iris admits he ran off again.

Barry wakes up to find that they had to give him 40 IVs to get his fluids up. They need to adjust his diet to his changed metabolism. Joe arrives and is angry at everyone for letting his kid endanger himself. Once again, Barry says that Joe is not his father and cannot stop him. Joe lectures the entire room on what they are doing and leaves.

In an alley, the killer, a man named Black, meets Stagg's bodyguard. Black wants to kill Stagg immediately, the guard wants to plan more carefully. They argue, and the guard leaving, telling Black he should have brought his army. Black begins to vibrate, and separates into copies of himself. "I am an army." The multiples attack the bodyguard, killing him.

In Barry's lab, Joe brings a skin sample that was found on the body of Stagg's bodyguard before going to talk to Stagg. Iris comes in and asks Barry why Joe is mad at him. Barry lies and says "work." Barry asks Iris why she is mad at him, and she reminds Barry that they were supposed to meet so he could explain Stagg's science for her journalism article. Now she needs to write about something else. Barry apologizes, but Iris doesn't buy it and insists that he tell her the truth about what is happening. Barry tells Iris everything about his ability and feelings from her, but he does so at super speed, so that she doesn't hear any of it. They are interrupted by his test results, showing that the skin cells of the murderer are baby cells.

Eddie and Joe talk to Stagg about who might be targeting him. They mention a number of lawsuits against Stagg, including one by Black. At that moment, Black enters and starts shooting. Eddie, Joe, and Stagg all take cover.

At the precinct, Barry sees the police all rushing out, and finds out that there is a shootout at Stagg's, where Joe is.

Joe covers while Eddie escapes with Stagg. Black separates, which Joe sees. Barry runs in and gets Joe out, then returns to try to talk Black down. Black won't give up, so Barry fights him. But the duplicates are too many and Barry is beaten hard before he runs out to escape.

Caitlin patches Barry up while Wells researches Black online. It turns out that the organ transplant technology was Black's, and Stagg stole it. Barry admits that he is not a fighter. Wells tries to encourage Barry, but Barry says that all this is a mistake and runs out.

In flashback, young Barry has run all the way to the prison and gets a five minute visit with his father. Henry admits that Joe was keeping Barry away because Henry doesn't want his son to see him likes this. Barry begs the guard to let his father go and insists that Henry is innocent. Henry tells Barry he can't help and that he needs to listen to Joe, who has arrived by this point.

Barry stops at a cafe where Eddie and Iris are watching Eddie on the news, talking about the shootout. Barry congratulates Eddie on saving Stagg.

Joe offers protection to Stagg again. Stagg says he's beefed up security and threatens Black if he shows up. Wells arrives, and he and Stagg insult each other. Wells talks to Joe about Barry. Jo remembers that Wells wanted Barry at STAR when he was in the coma and wants to know if Wells knew from the start. Wells confesses that he had suspicions. Joe doesn't care about saving the city; he just wants to protect Barry. Wells say that Barry quit, but it won't matter. He'll try to help someone else, and get killed because he doubts himself. Joe's doubt is causing Barry's. Well says that Joe isn't the only one who cares about Barry.

Barry and Iris eat in the café. He tells her that he's been distant because he had a thing he thought was important, but it turns out he is not good at it. But he is good at being her friend. He wants to help her find a new article. She says that she has, and it actually interests her. She wants to know about the red streak that's been saving people. Caitlin calls Barry at that point, she and Cisco are at STAR Labs, and so is Black.

Barry arrives to save them, only to realize it isn't Black, but one of his replicants, which Caitlin grew. But it is an empty shell, the real Black needs to think for it. Therefore, if Barry takes out the prime Black, the others should fall. He should look for a weakness, like fatigue. Joe arrives and shoots the replicant, not knowing what it is. Joe admits that the police can't handle things like this, only Barry can stop Black.

Stagg is in his office when Black arrives and kills his guards. Barry arrives in time to save Stagg. He tries to talk to Black again, even as he dodges bullets and fights with Black and his duplicates. Black admits that it is not just the stolen tech. Black's wife, Elizabeth, needed a heart transplant. Black invented the tech to save her, but she died after Stagg robbed Black. Barry is overwhelmed as Black makes hundreds of duplicates. The team coaches Barry on finding the prime Black, but it is Joe's words that get through to him. Barry takes off through the crowd of Black's until he sees one perspire and attacks. Once he knocks out Black Prime, the others all collapse. The Prime rises and runs at Barry, who dodges, and Black goes flying out the window. Barry catches him and tries to pull him up, but Black replicates extra hands to force Barry to release him. Black falls to his death.

At STAR Labs, Wells comfort Barry and says Black didn't want to be saved. Cisco nicknames Black Multiplex. Barry tells Cisco, Caitlin, and Wells that they're all with him. The lighting stuck them all.

Joe shows at Barry lab with Barry's favorite pizza. He shows Barry that he knows about his clippings on his Mom's murder and offers to help Barry save his father. Barry lists all the fatherly things Joe has done finally acknowledges that Joe is a father to him. They share the pizza.

Wells goes to Stagg's office. They discuss both Black and the red blur that saved Stagg. Stagg is fascinated and wants to catch the red blur, so that he can find a way to duplicate his power and profit from it. Wells stands up and kills Stagg. "He's called The Flash. Or he will be one day."

The Flash Recap With Spoilers: The Fastest Man Alive