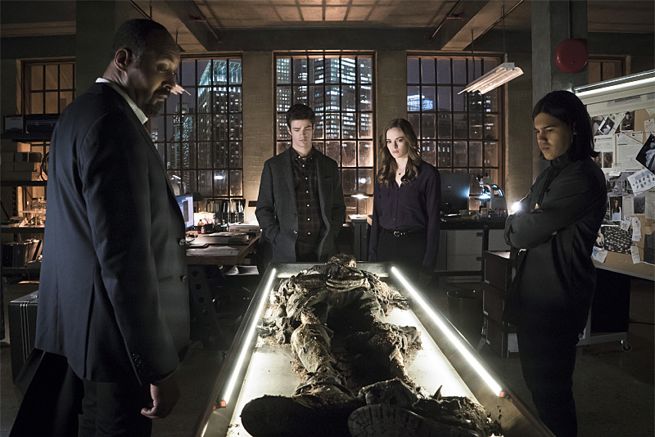 "Who Is Harrison Wells?" begins with Barry, Joe, Eddie, Cisco and Caitlin theorizing how Harrison Wells could be The Reverse Flash and the murderer of Barry's mother. Barry recalls how Dr. McGee mentioned that Harrison Wells changed the night his wife died in a car accident outside of Starling City, so Joe and Cisco decide to head there for answers. Caitlin storms out from the meeting, however, unable to cope with the accusations facing her mentor.

Across town, a woman enters a bank vault and unloads its contents. Or did she? When she's caught on camera and brought into Central City PD, the woman tells Eddie ithat she didn't do it. Eddie theorizes that maybe a metahuman with mind-controlling abilities made the woman do it.

Elsewhere, a man presents the same diamonds that the woman stole from the vault to pawn shop. The man looks the diamonds up, discovers that they're stolen, and calls the police.

At STAR Labs, Caitlin still doesn't believe Barry's theory. Barry then gets a call from Eddie, who's following the man trying to sell the diamonds. The Flash races over to assist, but makes a startling discovery. The man is a shape-shifter, and can assume the appearance of any person he touches. Changing his (or her) identity with each step, the thief eludes Flash.

Barry goes back to STAR Labs, where Harrison Wells confirms that shape-shifting is possible. Wells and Caitlin warn Barry against touching the shifter; otherwise he/she will assume Flash's appearance and discover his secret identity. Wells goes through a string of recent crimes and targets a possible suspect: A man named Hannibal Bates. Barry takes the info to Eddie.

Over in Starling City, Cisco and Joe meet with Captain Lance, who gives them a police report for the Wells' car accident. Cisco and Joe ask to go to the crash site for a more hands-on look. But before they go, Laurel Lance walks in and asks to speak to Cisco in private. She then tells Cisco that she knows who The Flash and Arrow really are, revealing her secret identity as the Black Canary. Why? Because she needs Cisco to help modify her Canary sonic device. Cisco agrees.

Back in STAR Labs, Caitlin conducts some of her own research on Wells. Still unsure, she goes to Wells' apartment to ask him herself. But before Wells can answer the doorbell, Barry (who's obviously following her) whisks her away. Speaking in private, Caitlin defends Dr. Wells. Barry says that if Caitlin tells Dr. Wells about their suspicions, his dad will never be released from prison. Caitlin agrees to remain quite, at least until Joe and Cisco return.

Barry and Eddie then meet to question Bates' grandmother. After shaking Eddie's hand, the old woman says she hasn't heard from Hannibal in ages, before excusing her to make tea. But the woman is actually Hannibal, who changes into a young woman and flees. Barry and Eddie chase after him at human speed, to avoid giving Barry's secret identity away, but Hannibal escapes. More importantly, he then shifts into the form of Eddie and shoots to cops aiding in the mission. Eddie and Barry find the downed officers, and call fro help. Unfortunately, a camera in the police car caught the footage of "Eddie" shooting the cops. Eddie is arrested, while Barry and Captain Singh protest his innocence. Barry must find a way to prove the shooter isn't Eddie, but the shape-shifting Bates.

At the Wells crash site, Joe, Cisco, and Lance investigate. Using a high-tech tachyon detector, Cisco finds finds tachyon traces yards from the road. The group starts digging, where they find a body buried. They confirm the body as the real Harrison Wells'. When they go back to the Starling City Police Department, Cisco gives Laurel an upgraded Canary sonic screamer. Cisco dubs it "The Canary Cry."

Back at Barry's apartment, Barry is visited by Bates, who's assumed the appearance of Eddie again. Lying that Captain Singh released Eddie, Bates walks in and knocks Barry out before Barry suspects anything. With Barry unconscious, Bates touches him and assumes his form. But, will he absorb Barry's super-speed as well? Then, Caitlin arrives at Barry's. Unaware, Caitlin tells Bates how she could devise a serum that could halt his shape-shifting abilities. She takes Bates back to STAR Labs, where she devises the serum, which will only remove his powers temporarily. As Caitlin concocts the serum, Bates kisses Caitlin. Surprisingly, Caitlin returns it for moment.

But then, Iris arrives. She has a plan to prove Eddie's innocence, using the footage from the cop car. Eddie is left-handed, but the man shooting the cops uses his right hand. Dr. Wells then comes from nowhere and tazes Bates, known that he wasn't Barry.He says that the "Barry" standing before them used the wrong hand too. Iris and Caitlin try transporting the unconscious Bates to the Police Department. But on the way, Bates comes to, shifts into a little girl in the back of Iris' car, and starts screaming that the two kidnapped her. When two good samaritans open the car door to help, Bates escapes.

Caitlin then goes to free the tied-up Barry from his apartment. They go back to STAR Labs. Wells confirms that Bates can't borrow Barry's speed, just his appearance. They strategize that Barry must inject Bates with the serum. They then locate Bates at the airport, and Flash pursues him. Barry tries fighting Bates, but Bates is formidable fighter. Eventually, Barry is able to best Bates and inject him with the serum. With Bates rendered unconscious, Flash takes him back to STAR Labs' metahuman prison.

With Bates imprisoned, Eddie is proven innocent and freed. With the charges dropped, Eddie connects with Iris and explains why he's been so distant. He tells Iris that he's been working with The Flash, but not that Barry and Flash are the same person.

Back at Barry's lab in the police department, Barry, Cisco, and Joe show Caitlin the body of the real Harrison Wells. Barry says that the Wells they all know is a completely different person. When Joe exits the building, he finds Wells waiting for him in the lobby. There, Wells acts as cagey as usual, and says he and Joe should gets drinks sometime.

Back at STAR Labs, Cisco, Barry, and Caitlin run tests on what could have caused the particle accelerator's destruction, thinking it could give more clues about Wells. While running various readings the building's structure, Cisco picks up a high tachyon reading in one, specific location. The group pinpoints the tachyon reading, and discover Harrison Wells' secret chamber. Walking into the room, they all see Wells' (or Eobard Thawne's) Reverse Flash uniform, and the newspaper from the year 2024 declaring that the Flash is MIA following a great crisis.

The Flash Recap With Spoilers: Who Is Harrison Wells?