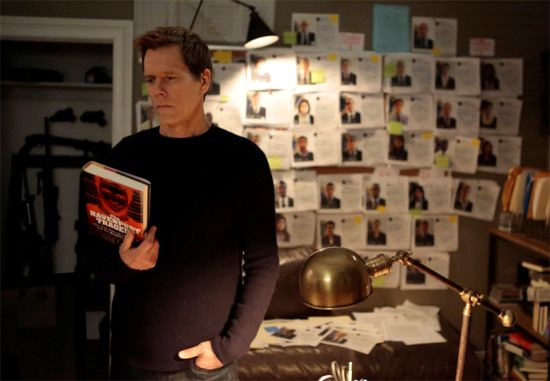 Fox has released four sneak previews of tonight's episode of The Following, which is called "The Messenger." The first video showcases various scenes from the episode. In the second video, Ryan gets an intriguing offer that leads him straight into danger. In the third video, Ryan won't comment on whether Joe is dead or alive. In the fourth video, Joe is told that mocking religious beliefs at the compound will not be tolerated. After a tragic turn of events, Ryan attempts to find the man who originally taught Joe to kill, in hopes of finding new answers. Meanwhile, at the compound, Joe tries to get his bearings, while Emma and Mandy wait for him to reveal his new plan in "The Messenger" episode of The Following. The Following cast includes Kevin Bacon as Ryan Hardy, James Purefoy as Joe Carroll, Shawn Ashmore as Agent Mike Weston, Valorie Curry as Emma Hill, Connie Nielsen as Lily Gray, Sam Underwood as Luke, Jessica Stroup as Max Hardy, and Tiffany Boone as Mandy Lang. Guest Cast includes Shane McRae as Robert, Jake Weber as Micah, and Jacinda Barrett as Julia. "The Messenger" episode of The Following airs on Monday, March 10, 2014 at 9 PM ET on Fox.

The Following Season 2 Episode 8: The Messenger